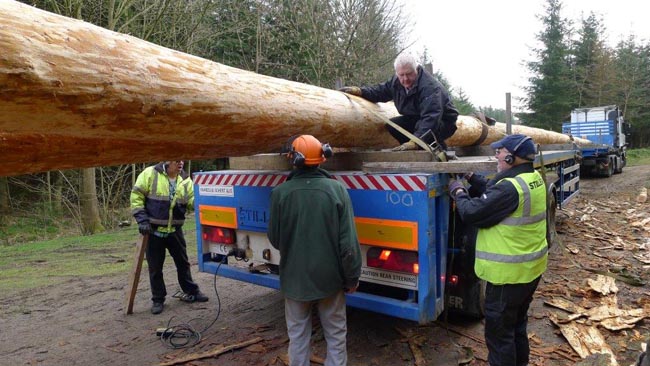 Stiller Warehousing and Distribution was in pole position to help the Great Yorkshire Show go ahead this week.

The Aycliffe transport company commissioned to transport two 125ft-long logs from Scarborough to Harrogate to form an integral part of the farming showcase, when around 135,000 visitors were expected to attend what is acclaimed as England’s premier agricultural show this week.

The poles are being used for against-the-clock climbing competitions during this summer’s festival, which started on Tuesday and ended on Thursday.

Pole climbing competitions are staged over the three days, and see competitors from across the UK race against the clock in a bid to beat the world record. 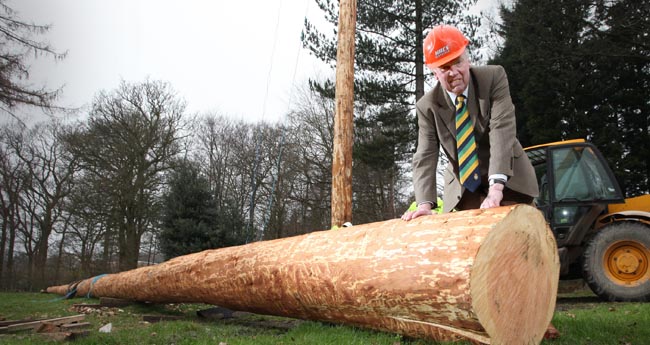 Above: Show director Bill Cowling watching as climbing poles are craned into position in readiness for the 2014 Great Yorkshire Show.

The Guinness Book of Records lists Australian Mark Bryden as establishing the record for climbing an 80ft pole in 9.61 seconds which he did in 2001.

The poles were kindly been given by Dawnay Estates and were felled in Bedale, part of the Wykeham Estate near Scarborough.

The trees are from a 71-year-old stand of Douglas Fir, planted in 1943, and have to be chosen so that once the branches have been removed there is a clear stem for climbing of 85 feet above the ground (40 ft below the ground).

And Stiller, based on Aycliffe Business Park, had the unenviable task of transporting the logs 60 miles to the Harrogate-based showground on a low loader, before being trimmed to create an 85ft climbing height.

Stiller’s site and facilities manager, Herbie Blaser, was in charge of the operation.

“It wasn’t the most run of the mill jobs,” he admitted. “But we’re asked to transport all kinds of weird and wonderful things up and down the country, so we’re well positioned to deal with an abnormal load like this.”

The show’s PR Manager, Judy Thompson, added: “The poles form an integral part of the show, creating a formidable skyline.

“They’re also used for the hugely-popular pole-climbing competitions over the three days when climbers will be desperately trying to set a new world record.

“These new logs replace the existing poles which had come to the end of their useful lives and will now stay in place to be part of the Great Yorkshire Show for a number of years.”

The Dawnay Estates are owned by the 12th Viscount Downe who have a strong connection with growing trees, not particularly as part of the Forest, but with producing semi-mature trees, hedging and shrubs as part of their business; Wykeham Mature Plants.