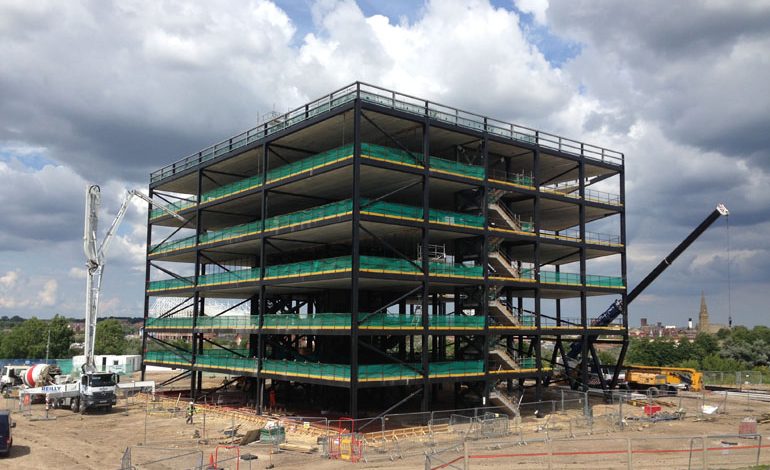 After completing steelwork on the Riverwalk regeneration development in Durham city, the family-run business has fabricated and erected 550 tonnes of steel on the former Vaux site in Sunderland, for main contractor Carillion.

The £20m, state-of-the-art development should be completed by June 2018 and kick-start what is being lined up as a 20-year project.

The five-storey building, the first of many planned for the city centre site, will be a 60,000 sq ft office block which could also house a bar, cafe and restaurant on the ground floor.

The regeneration work is being delivered by Siglion, a joint venture set up between Carillion and Sunderland City Council.

Carillion awarded the steel element of the project to Finley Structures, which earlier this year completed an 1,100-tonne project at the £30m Riverwalk development in Durham.

As well as fabricating and erecting 550 tonnes of steel at the former Vaux site, Finley also installed six floors of PC concrete floor planks, three PC stairs and a PC lift-shaft, and completed their scope of works in the summer.

The firm’s operations manager Jim Graham said: “This was a particularly pleasing project for us, not least because of the economic importance of the project to Sunderland as a city, but also because of the many added-value items within it that we completed for Carillion, including off-site intumescent painting.

“It has supported local jobs in its construction from within our own company, while we’ve also used local labour to erect the steel, and it was delivered on an extremely tight programme, so all-in-all it’s been a win-win project.”

The former brewery site in Sunderland closed down in 1999 and has stood derelict ever since.

Tesco bought the land in 2001, two years after it became available, but failed to build a supermarket there, and the site was then bought by Sunderland City Council in 2011.