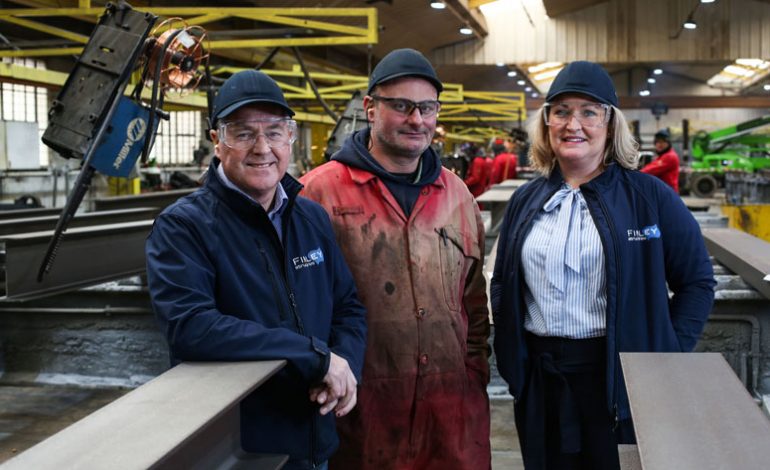 Finley Structures goes into 2020 with a record order book, after a record year of sales – and with its 20th birthday to look forward to later this year.

The phenomenal success story of the family-run steel firm continues into another new year after Finley recorded a record £17.6m turnover in 2019.

And the firm’s order book is better than ever, with an unprecedented volume of work involving more than 8,000 tonnes of steel for clients BAM, Bowmer & Kirkland, Galliford Try, Kier, Tolent Construction and Sir Robert McAlpine.

The contracts involve a number of exciting new local developments. On one side of the River Wear, Finley Structures is supplying 1,000 tonnes of steel for Kier Construction to build Durham County Council’s new headquarters.

Across the water, 3,200 tonnes of Finley steel will enable Tolent to construct the Milburngate development, featuring offices, apartments, bars, restaurants, cinema and hotel.

It follows Finley working on the 1,100-tonne Riverwalk retail and entertainment complex, and it all adds up to the company playing a pivotal role in what county council chief executive Terry Collins has described as a “game-changing” period in Durham’s history.

Managing director Julie Raistrick said: “While we win work all over the UK, we do love to work on local projects.

“The Durham city work, in particular, is something we’re very proud of, as it’s leaving a generational footprint on the city.”

Finley Structures is also working on several other high-profile contracts, with the firm’s order book almost at capacity until the autumn.

“This is very unusual as, traditionally, we are usually only able to forecast three-to-six months in advance,” says Julie.

“So, it goes without saying, we’re delighted with this positive start to the year.”

Finley Structures will mark its 20th birthday later in 2020 with a big celebration at its 87,000 sq ft site on Aycliffe Business Park, which is home to some of the latest technology in steel fabrication.

“It’s a special time for the company, as we approach our 20th anniversary,” says Julie.

“The business was formed by my father in 2000. Perhaps even he might not have envisaged at the time – when he acquired our site from British Steel – that we’d grow into the company we’re so very proud of today.

“The fact we’ve not only survived but thrived in such a volatile industry is testament to John, the family and our hardworking, dedicated staff.”

There is one employee who will remember the early days – plater and welder Wayne Clarke, who has been with the company from day one.

“I’ve seen a lot of changes over the years at Finley Structures, but it’s always been a great place to work,” says Wayne.

“I’ve always got on very well with everyone on the shop floor and the management have always been good to work for. I enjoy working with the people here, it has always had a family feel to it and I think that’s why the business has done so well.”

Julie added: “Our 20th anniversary is a milestone we can all be incredibly proud of, and one that should be celebrated.”