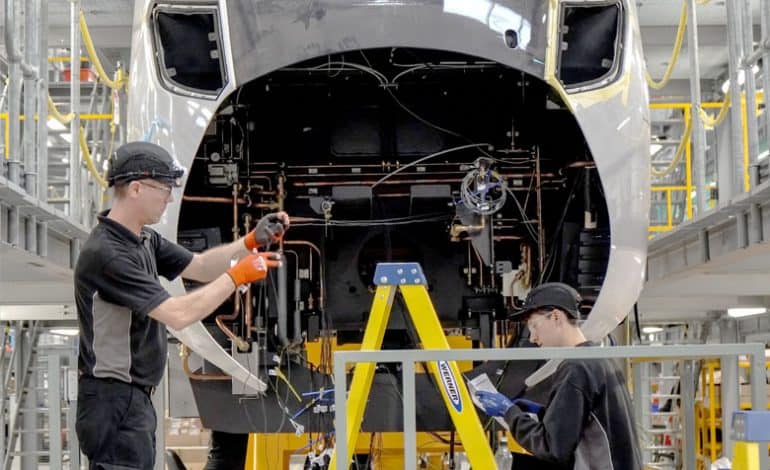 In a major milestone for the £350m project, carriages from a Class 805 bi-mode train are being coupled together to mark the start of the extensive testing programme ahead of the planned entry into service in 2023.

All basic functionality of the train – from brakes to engines, doors to toilets – will be put through their paces prior to the start of dynamic testing later in the year, when the trains will move under its own power for the first time.

The new fleet will be a mix of ten seven-carriage electric trains and 13 five-carriage bi-mode trains, with the ability to switch seamlessly between electric and diesel power.

The electric trains (Class 807) will operate between London, the West Midlands and Liverpool while the bi-mode version will be focused on the London to North Wales route.

New images give a first look at the extent of progress on the next generation of intercity trains for the West Coast route.

“The investment is a key part of our exciting plans to raise the bar for the UK rail industry, and our wider commitment to improve the customer experience and a more sustainable operation.”

The new Hitachi trains offer more space and a quieter journey compared to the diesel-only Voyager trains they replace.

This will lead to a 61 percent reduction in carbon emissions. Customers will also enjoy better and more reliable free Wi-Fi, at-seat wireless charging for electronic devices, plug sockets and USB slots; a brand-new catering offer and a real-time passenger information system that can advise customers of connecting rail services.

Jim Brewin, head of UK and Ireland at Hitachi Rail, said: “Our teams across the UK are working tenaciously to deliver more Hitachi intercity trains, which are proven to boost reliability and performance.

“We look forward to Avanti passengers experiencing the transformation that follows the introduction of this brand new fleet.”