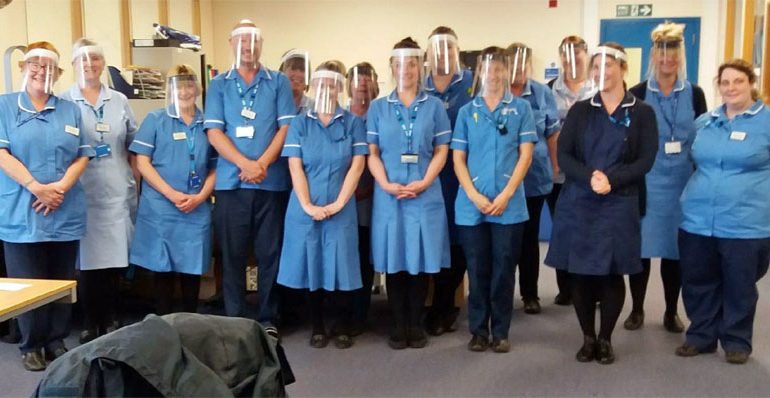 A stair climb challenge has raised £16,000 to fund protective visors for local organisations in need of vital PPE kit.

UTC South Durham’s ‘Visors for Victory’ campaign has so far raised £24,000 in total.

The local university technical college has already donated more than 1,500 visors to over 65 organisations across the North-East, including hospitals, care homes, GP surgeries, and food banks.

Their latest fundraising stunt was a sponsored stair climb, which saw competitors scale the combined heights of the National Three Peaks in their own homes, on Monday (April 13).

The ‘Visors for Victory’ initiative was created at the beginning of April in response to the lack of personal protective equipment (PPE) available to key workers during the fight against Covid-19.

UTC have been raising funds to cover the cost of materials for the visors on their Just Giving page, and through entry fees and sponsorship from the National Three Peaks Stair Climbing Challenge.

All funds raised will go towards covering the cost of production for the visors. Any remaining funds will be donated to the NHS.

UTC staff designed the visors and have been producing them using laser cutters.

Principal Tom Dower, who took part in the stair climb challenge, said: “The Stair Climbing Challenge was a fantastic opportunity to raise funds for a very worthy cause.

“It was hard work, but well worth it considering how much we’ve raised to help provide visors to key workers!

“As engineering and technology specialists, UTC staff are well placed to use their skills to help provide visors for key workers until they can acquire PPE through medical suppliers.

“It has been incredible to see how staff, students, and the wider community have come together to help make these much needed visors. I would like to thank all involved for their generosity!”

UTC have also received generous donations of materials from companies across the country, including acetate sheets from Wright’s Office Supplies, and plastic from AA Flags and the Essex branch of the Netherlands-based company, Desch Plantpak.