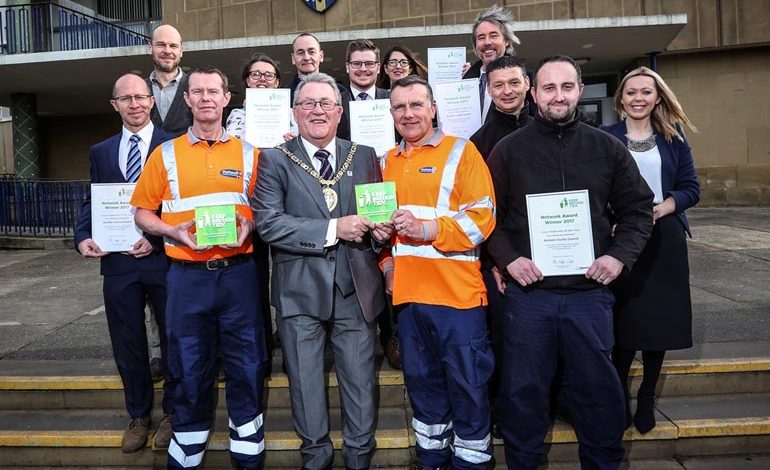 Neighbourhood wardens and staff from civic pride, clean and green and recycling – all have been recognised for their contributions to Durham County Council winning two prestigious national environment awards.

The council recently ‘cleaned up’ at the Keep Britain Tidy Awards, taking home prizes for best local authority and best campaign for its Operation Stop It crackdown on fly-tipping.

The authority has now moved to thank the frontline staff whose day-to-day work to fight fly-tipping, dog dirt or litter was key to the success.

Staff from the neighbourhood protection, civic pride, clean and green and strategic waste teams were invited to a full council meeting so they could be recognised for their efforts to boost recycling rates or enhance the county’s environment through planting of wildflowers.

Framed certificates were handed out to workers from the various teams by council chairman Cllr Eddie Bell as a gesture of appreciation.

There was also a spontaneous round of applause for the hard-working staff from members.

Cllr Bell said: “Everyone is thrilled to have won the two Keep Britain Tidy Awards.

“We thought it was only right that we show our appreciation for the dedicated and committed staff who help maintain our county’s environment to an award-winning standard.”

Cllr Simon Henig, leader of the council, added: “I’m really proud of everyone who has played a part in this success story.

“Their role in keeping our county looking as good as it does cannot be underestimated.

“I’d also like to thank, on behalf of everyone at the council, all the other organisations we work with on our many environmental campaigns and schemes, whose contributions have been vital to us winning these awards.”

The awards celebrate the achievements of local authorities, businesses and land managers in improving the quality of public spaces through campaigns, innovations and partnerships.

The council won Local Authority of the Year in recognition of its commitment to improving and protecting the environment through a number of projects and campaigns.

Operation Stop It was named Environmental Campaign of the Year having led to a 22 percent reduction in fly-tipping across the county.