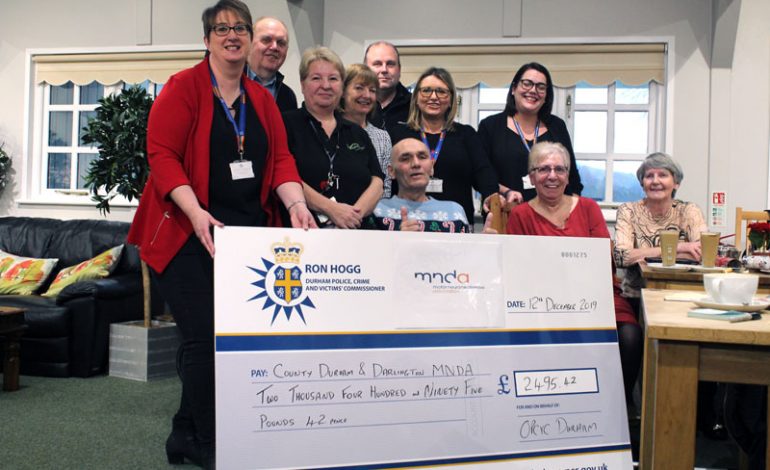 Staff from the Office of the Police Crime and Victims’ Commissioner and Durham Constabulary presented the cheque for £2455.42 at the monthly social for the County Durham and Darlington branch of the Motor Neurone Disease Association at Poplar Tree Garden Centre, Shincliffe.

Colleagues came together to raise the funds following the sad news that the Durham Police, Crime and Victims Commissioner, Ron Hogg had been diagnosed with Motor Neurone Disease, in September of this year.

Vicki Booth, Engagement Officer at the Office of the Police, Crime and Victims’ Commissioner said “as staff we really wanted to come together to show how much we care about Ron. The generosity and kindness of those who have donated prizes, or bought tickets has been amazing.”

In November a fantastic quiz night was held at Pelton Community Centre, where teams came together to compete for a trophy. This was alongside a gigantic raffle and tombola, where staff and lots of local organisations and businesses donated great prizes.

The literal icing on the cake was a secret auction for a Christmas cake, lovingly baked by Susan Birbeck from Police Headquarters, which raised over £140. She really is star baker, as this was in addition to £150 she collected after baking over 100 scones and selling them to staff.

Susan said: “I just wanted to help. I couldn’t believe that my cake raised so much money, I was thrilled.”