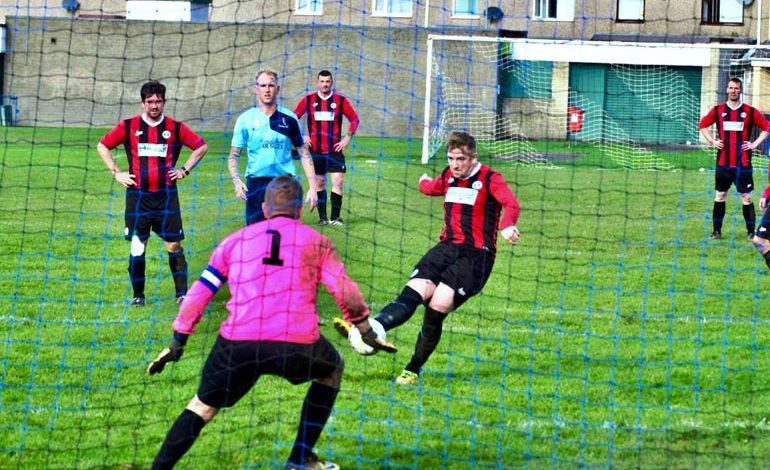 But the game started very badly for the hosts as a lazy back pass from skipper Gareth Boyes to his keeper was intercepted by Staindrop forward Ben Goodfellow who slotted home easily to make it one nil after just 30 seconds.

The lead did not last long, a corner in the sixth minute was swung into the Staindrop box and Ryan Stonehouse rose about the rest to nod home the equaliser.

The home side however couldn’t get into their stride and the pitch was making it difficult for either side to stamp their mark on the game.

On the 25th minute it was the away side who took the lead again, Ben Goodfellow getting his second of the game after another defensive error.

The home side needed to step up in the second half and that’s exactly what they did. A penalty awarded on the 55th minute should have seen them get back into the game, but David Teders effort was saved well from the Staindrop Keeper.

David Teder made up for the penalty miss on the hour mark after the ball was failed to be cleared with any conviction and he struck the ball sweetly from just outside the area to make it 2-2.

The hard work was starting to pay off as Kyle Allens cross from the corner bounced of a Staindrop defender and into the net to make it 3-2 to the hosts.

It was the substitute’s turns to get on the score sheet next, with Anth Campbell making it 4-2 on 80 minutes and Chris Jones, returning to the Sports Club for his first game of the season to make it 5-2 with only minutes remaining.

Next up: Division 2 Quarter Final (H) to Spennymoor Ash Tree.