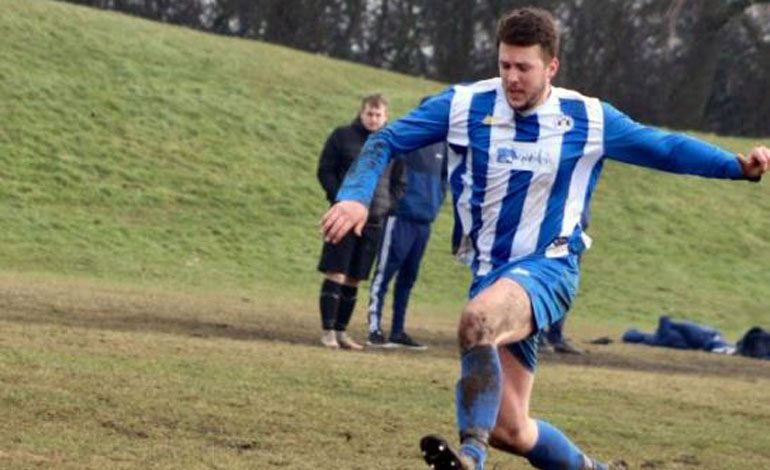 With the Moore Lane pitch just about holding up, this game was always going to be a scrappy affair but with bragging rights up for grabs it was the Sports Club that started the stronger of the two.

It took just six minutes for the opening goal, a long throw from right back Jonathan Clegg found the head of Connor Hughes who towered over everyone to nod home. Controversy surrounded the equaliser on 20 mins as the home team had a goal disallowed for offside and the resulting free kick saw a quick break and the equaliser, Mason Stead slotting past Mark Craggs to make it 1-1.

Leading goal scorer Kyle Allen made it 2-1 to the Sports Club on the half hour mark with an overhead kick which managed to wrong foot Hallington Goalkeeper Nick Peterson. A derby wouldn’t be a derby without a little frustration creeping in and a foul on the Hallington goalkeeper led to a bizarre goal for the home team. Kicking the ball off the back off Callum Farley, the away keeper then saw the ball come back towards himself, with Farley beating him to the ball and crossing for Kyle Allen to tap in at the far post for his 30th goal of the season.

The second half was pretty non eventful, but tempers frayed as a player from each side was send off after a small altercation reducing both sides to 10 men for the last half hour of the game. Hallington did come close on two occasions with the best chance coming from Luke Black whose cross come shot hit the cross bar and the home sides best effort falling to centre half Darren Griffiths also hitting the bar in the late stages.

Six straight wins in a row for the Sports Club now sees them pushing hard for automatic promotion, with four games in hand on the two of the three teams above them and only four points behind league leaders, WA Tons, who sit 12 points clear of the sports club having played two games more.