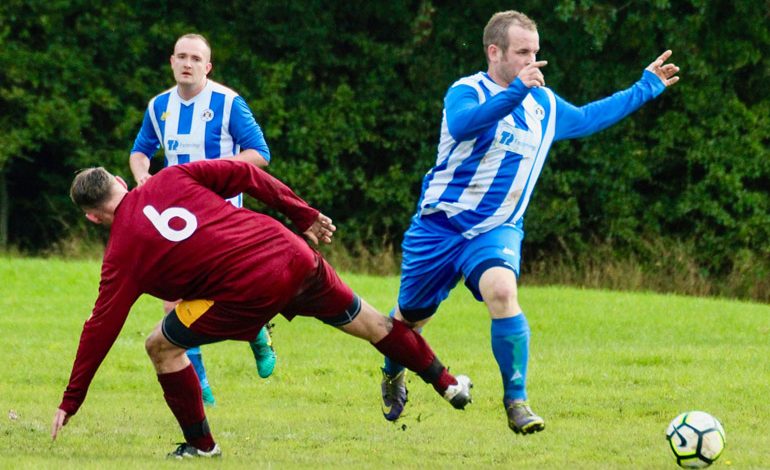 Newton Aycliffe Sports Club finally got to play a home game for the first time this season and ran out 5-4 winners in the Division 2 Cup.

They were paired against Toft Hill Three Tuns who had managed to scrape a 1-0 win against the Aycliffe side in the league the previous week.

The Sports Club got to the final of this competition last season and wanted to ensure a good run in the competition this season.

It was quite a sloppy start to the game, with the narrow pitch playing its part in a claustrophobic and packed midfield.

It wasnt until the 23rd minute before the deadlock was broken, an in swinging corner bounced off the shoulder of Ollie Gell to claim his second goal of the season.

The home side then looked to take control with Connor Hughes and Kyle Allen linking up well before playing Gell through again only to see his tame shot go wide of the post.

Toft Hills first real attack resulted in a corner after stand in goalkeeper Mark Craggs saved superbly to keep the home side in it. However, the resulting corner found its way past the keeper in a crowded goalmouth to make it 1-1.

Anthony Campbell’s mazy run won the Sports Club a throw in deep in the oppositions half which found David Teder who crossed deep to the far post for Connor Hughes to head home and make it 2-1 going into the break.

The second half started brightly for the home side with Campbell (pictured above) again taking on two players before hammering home the third goal from outside the box.

An equally excellent finish from David Teder saw his swing shot fly into the top corner with the keeper helpless at the unexpected effort.

Now cruising at 4-1 and with the away side reduced to 10 men due to injury and no subs, the Club took the foot off the gas and some sloppy defending saw the Three Tons claw a goal back to make it 4-2.

It was soon 4-3 after a long ball over the top saw the offside trap broken and the ball coolly slotted home. And it looked like the game would be going to penalties as an interception from Darren Griffiths somehow managed to fall to the Tons centre forward to slot home the equaliser.

With the clock ticking down, man-of-the-match Campbell managed to do what he does best one more time as he broke through the Toft Hill defence and find Ollie Gell who managed to slot the ball home for the winner.

Sports Club go through to the next round and are hoping to keep the unbeaten cup record intact next Sunday, away to Washington Lambton Lions in the Durham FA County Cup.