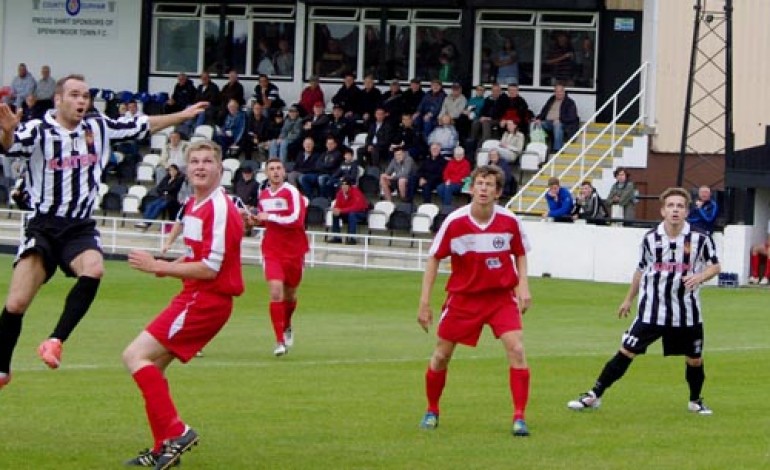 Newton Aycliffe suffered a fifth straight defeat at Spennymoor, albeit with a much-improved performance.

The Newtonians, on the back of four consecutive league defeats going into the game, were expected to get a hiding by the three-times league champions.

But Aycliffe produced a gritty display to frustrate the home side and their supporters, until Darren Craddock’s 76th-minute own goal edged Moors in front.

Craddock had been enjoying a fine game for the Blues up until then, when he conceded the free-kick which led to the goal, received a booking, then inadvertently turned the ball past Scott Pocklington.

It was the slice of luck Spennymoor needed, because they hadn’t looked like scoring, with a new-look, make-shift Aycliffe defence performing admirably at the Brewery Field.

Paul Broom dropped into the right-back position, and new signing Matthew Coad occupied the left-back berth, with young midfielder Josh Knox putting in a man-of-the-match display in the centre of defence, alongside Craddock.

They kept Moors at bay for much of the game, and even though you could argue the visitors deserved a point for their toils, Spennymoor did enough to win it in the end.

It was Aycliffe who started brightly, and there was an early chance when Sean Tarling’s shot from edge of box was deflected over.

Paul Robinson won a free-kick 25 yards out just a minute later, but Stuar Owen’s curler was well over.

At the other end, Daniel Moore headed wide from Keith Graydon’s free-kick mid-way through the half, before Pocklington pulled off two great saves to deny Mark Davison twice.

Other than that there were few chances at either end in a fairly cagey first half, but Aycliffe weren’t hanging on, they were very much in the game.

In the second half, and on the hour-mark, Robinson almost caught Moors ‘keeper Robert Dean off-guard with a speculative effort – the former Geordie striker controlled brilliantly before hitting a first-time volley from all of 40 yards, but Dean managed to gather.

Right-back Kallum Griffiths found space in a dangerous inside-right position in the 69th minute but his cross-shot flashed across the face of goal.

Spenny’s opener came seven minutes later, with Craddock putting into his own net under pressure from Michael Laws, and Aycliffe’s heads dropped a little.

Spenny seized the initiative and gunned for a second. In the 80th minute, sub Joe Wlaton did well down the right before his fine cross was met with a Davison header but it was easy for Pocklington.

The Aycliffe ‘keeper – by far the busier of the two goalkeepers and a contender for man-of-the-match, had it not been for Knox’s heroics – saved from Gavin Cogdon two minutes later.

In a rare chance for Aycliffe, Robinson sneaked a yard on Newtonian Chris Mason but his shot was saved by Dean.

The home side got their second in the 86th minute with a scrappy goal – Cogdon’s deflected shot ran into sub Glen Taylor’s path and the tall striker dragged a miss-hit effort into Pocklington’s bottom left-hand corner.

It leaves Aycliffe bottom of the Ebac Northern League first division and still without a point, but they can take heart from this plucky performance and hopefully take it into Tuesday’s trip to fellow strugglers Durham City.