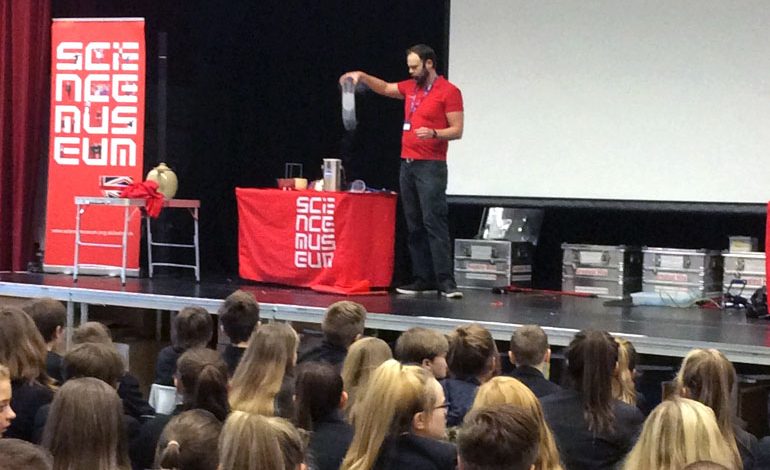 Students at Greenfield Community College have been given an exciting opportunity as Tim Peake’s Spacecraft arrives in the region.

Twenty-eight Year 9 students, along with two members of staff, were invited to a celebration morning for the arrival of the Soyuz descent module TMA-19M at the Locomotion Museum in Shildon, where they were able to see this amazing piece of space history.

Durham is hosting the Samsung-sponsored Museum Group National Tour of Time Peake’s Capsule between up to January 15.

As part of the tour a team of ‘Explainers’ from the Science Museum also delivered a Science show the ‘Greatest Hits’ to the whole of Year 9 at Aycliffe Campus as part of the celebration.

The students were entertained by an amazing selection of experiments which had strong links to the curriculum.

Deputy head Ron Milton said: “It has been a great opportunity for our students, they have enjoyed exploring the themes of forces and rockets and the way it has been brought to life through links to Tim Peake’s Soyuz Capsule.”

The tour will also offer a further opportunity for Greenfield students to visit the National Railway Museum at Shildon to experience a 4D virtual reality experience of the descent of the Soyuz Capsule and parachute.