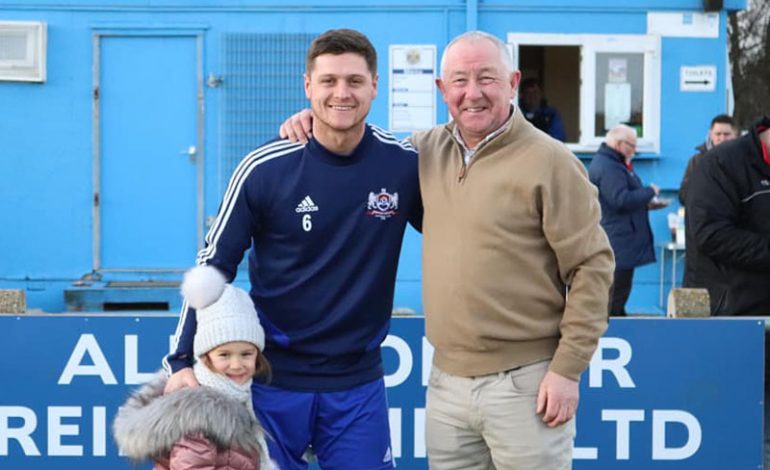 Newton Aycliffe skipper Aaron Brown made his 250th appearance for the club in Saturday’s win over Consett.

Before kick-off chairman Allan Oliver presented Aaron with an engraved salver to mark the occasion.

As ever, members of Aaron’s family attended the game with niece Orla assisting the chairman with the presentation.

Aaron previously played for West Auckland and Sunderland RCA before spending two campaigns in Sweden playing professional football. He returned to the North-East & joined Aycliffe in 2014/2015.

Aycliffe beat high-flying Consett 3-0 at the Beaumont Landscapes stadium with an outstanding performance in which they could have scored more goals (hitting the post twice) and looking in no real trouble at the back.

Aycliffe had the ball in the net after only five minutes when Liam Jarvie was played in and rounded the keeper, only to be deemed offside. Aycliffe were bossing the game and went ahead on 19 minutes.

Man-of-the-match Ethan Wood played a clever ball to Adam Burnicle, who beat his marker and smashed a shot past Hayes in the Consett goal.

Aycliffe had a good penalty shout three minutes later when Jake Petitjean appeared to be impeded, but the appeals were turned down.

Burnicle and Jarvie both had chances from difficult angles, and then right on half time a Jarvie cross was deflected against the post and out.

Aycliffe came out for the second half and initially they weren’t as effective as in the first, as they got to grips with Consett’s changes.

Adam Pickford had to make his first save in the 58th minute, but the shot wasn’t strong enough to trouble him. Aycliffe got going again and Andre-Vasile Ardelean hit the post after a good move. Jarvie was then denied a goal by the offside flag for the second time in the match.

Consett pushed on in an attempt to claw their way back into the game, and Aycliffe had keeper Pickford to thank as he made a fantastic double save to maintain the narrow margin.

Aycliffe were not to be denied and on eighty minutes got the second goal their fine play deserved. Substitute Johnson Ballan turned and hit an early shot from distance, Hayes could only push it out to Ardelean who slotted home.

Deep into injury time, Aycliffe got a deserved third goal to delight the home fans and cap a fine performance.

A long ball was swept out to Burnicle on the left-hand side and he went straight in on goal before despatching the ball beyond Hayes. This was his third brace in as many matches since joining the club.

The win saw Aycliffe climb to seventh in the table, with games in hand on the teams above them.