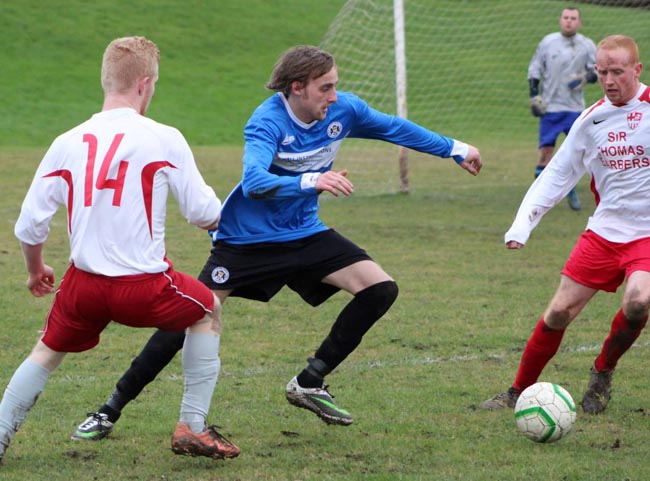 The second home game in a row saw The Sports Club win 7-1 against Bishop Auckland Laceys at Moore Lane.

The Sports Club welcomed back the return of Craig Barrigan and Sam McKerr who slotted into the back three alongside Craig Hannant. The game started very slowly with the away team dominating most of the early exchanges, catching the home side on the break on a number of occasions. With leading goal scorer Connor Hughes missing this week, Chris Jones had the opportunity to close in on his strike partner and started the process on the 25 minute mark, latching onto a through ball before rounding the keeper and powering the ball into an empty net to make it 1-0.

As in previous weeks, the lead was short lived when poor kicking from keeper Andy Hartley allowed Laceys to equalise on the half hour mark. Both sides then battled it out until half time without really threatening each other’s goals any further.

David Teder, partnering Jones up front, provided the ammunition for Jones to grab his second with a lovely flick through for the forward to the lob the keeper to regain the lead. His hatrick soon followed after a great cross from the right hand side by Craig Hannant which saw him head home the third and take his tally to 20 before the Christmas break.

A lovely weighted freekick on hour mark landed nicely for Teder to make it 4-1 and put the game beyond the travelling Bishop Auckland side. However the game was far from over, with the midfield battles now being won convincingly, and Ryan Stonehouse in particular standing out, Jones grabbed his 4th after some great vision from the ever impressive Anth Campbell played the forward through and finish with ease. Substitute Tom Postle made it 6-1 after working hard to plough through the defence and smash home and with the last action of the game, Jones grabbed his 5th and the Sports Clubs 7th to cap off a fine performance and see a 6th Straight win for the Aycliffe side.

There is now a short winter break which gives the lads a chance to re-charge their batteries and hopefully come back and continue this great run of form which has seen them drive into the top 4 of the league. The next game is at home to Witton Victoria on Sunday 4th January. We would like to take this opportunity to wish you all a very merry Christmas and Happy New Year.