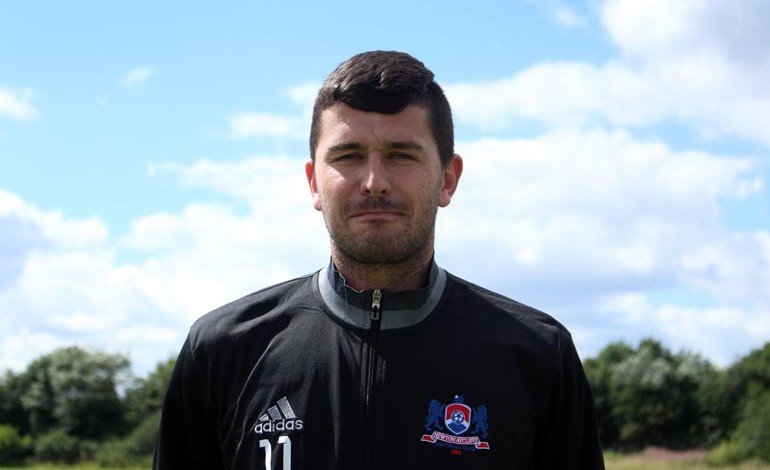 Striker John Campbell went one better than his Tuesday night hat-trick as Newton Aycliffe beat Marske United 5-2 in fine style at the weekend.

The result maintained Aycliffe’s third-place position in the Northern League with 22 points from 11 games.

The two sides had already met in the league this season with the Seasiders comfortable 3-0 winners in the reverse fixture in August.

However, as both teams found themselves with a potentially free Saturday thanks to their FA Vase exemptions the league brought forward the game from the planned date in January.

Both sides set away playing good football in windy conditions, trying to work an opening for their strikers. However, there were few chances early on.

There was a lengthy stoppage on 20 minutes following an injury to Michael Riley, with Andrew Ferrell coming on as his replacement.

This was a debut for Ferrell who had just signed from Bedlington, where he was manager until recently.

The breakthrough came in the 40th minute when Campbell hit a sweet strike into the corner of the net to make it 1-0.

In injury time Campbell repeated the feat, this time in the opposite corner, to make the half-time score 2-0.

Marske started the second half brightly, and pulled one back on 50 minutes through former Aycliffe player Jamie Owens, following a scramble in the box.

Aycliffe kept attacking and were rewarded when Dennis Knight scored direct from a free-kick, past the wall and goalkeeper Robert Dean’s dive.

Marske pulled it back to 3-2 through a Nathan Mulligan penalty on 85 minutes.

However, Aycliffe kept pushing and spared their fans a nervous finish when sub Harrison did well to control the ball and played an inch-perfect pass for Campbell to run onto and finish one-on-one to make it 4-2.

Aycliffe kept attacking to the last, and in the 93rd minute Dennis Knight skipped through the defence to square it to Campbell to tap in for his fourth and Aycliffe’s fifth.

Aycliffe have two more home games this week to bring to a close their sequence of five consecutive matches at Moore Lane.

Incredibly the first three games have seen a total of 23 goals, impressive by any standards, and testament to the entertainment value of Northern League football.

Aycliffe play Washington for the third time this season on Tuesday night (ko 7:30pm). The Nissan based club put Aycliffe out of the FA Cup in a replay in early August so the team will be looking to make amends.

They then welcome Newcastle Benfield on Saturday (October 1, ko 3pm).