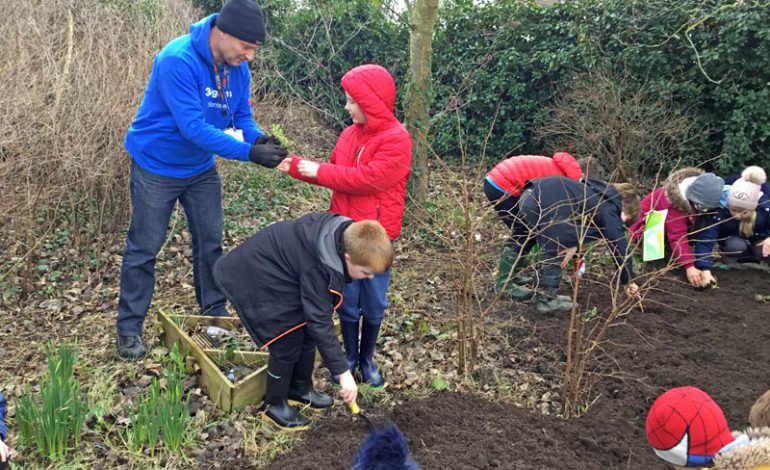 Aycliffe Village Primary School has received around 75 wildflower plants to create its very own wildflower meadow, from science-based technology company 3M, working in partnership with the charity Earth Restoration Service.

Staff from the 3M site in Aycliffe have been helping the pupils and staff to plant the flowers in the school grounds.

Called the Flutter Flower project, the school will re-introduce wild flowers species which in turn will support the return of native species of insects to the area.

The donation includes plants such as Cheddar Pink, Wild Basil, Lady’s Bedstraw, Wild Clary and Red Valerian. The meadow will valuable provide food sources and coverage for birds, butterflies and other insects.

The school has also received a signed Certificate of Recognition from the charity’s patron, Joanna Lumley, as well as educational resources about reflowering and reforestation.

Joanne Vest , science co-ordinator at Aycliffe Village Primary School, said: “This is a wonderful opportunity for the children to learn practical skills, from using tools to teamwork, as well as about the natural world.

“We’re very excited to be part of something that will make a genuine difference to the local ecosystem and wildlife. This direct and positive impact on the planet will be something our children can be very proud of; they will remember their role in it for many years to come.”

3M sustainability projects manager Romy Kenyon said: “Sustainability and environmental conservation are principles close to 3M’s heart and are ones that are increasingly important to young people.

“Almost all (97%) wildflower meadows have been lost since the 1930s and the flying insect population has reduced by 75% in the last 25 years.

“We hope that this collaboration between Earth Restoration Service, 3M and Aycliffe Village Primary School will help to redress this and enhance the pupils’ environmental understanding.”

Earth Restoration Service connects sponsors, who provide trees and plants, with landowners, who volunteer spaces such as schools and disused private land. Its programmes inspire volunteers, educate young people and improve to the local ecosystem through reflowering and reforestation.

Since the 1930s, more than half the UK’s ancient woodland has been destroyed and 60% of the country’s animal and plant species have declined in the past 50 years.

The charity’s aim is to plant 50,000 trees and enough flowers to attract 20 million insects across 1,000 sites by World Earth on the 22 April this year.