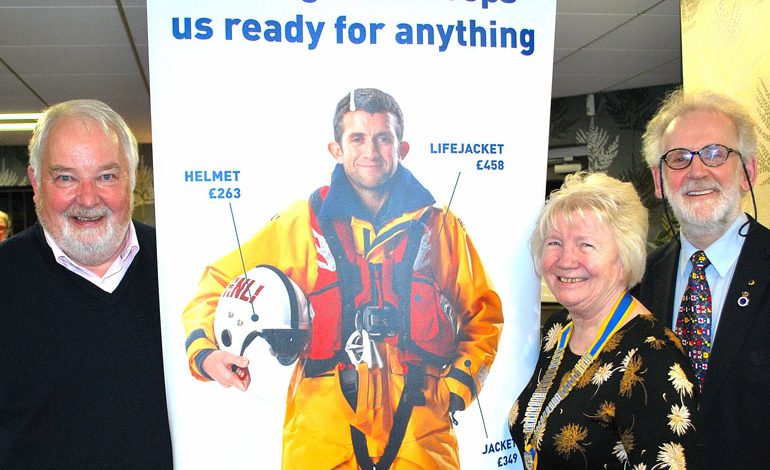 The dramatic story of a County Durham man who survived a horrendous gas explosion at sea which, one dark winter’s night, blew him off his ship and into the water 50 feet below was told to Newton Aycliffe Rotarians this week.

David Hastings, who now lives in Fencehouses, was a deck officer on a huge tanker when leaking explosive gas turned into a fireball and blasted him “like a projectile from a gun barrel” over the rails of the ship.

By the time a lifeboat reached him, David had drifted a half-mile away because of the strong current. He was then rushed to hospital where the doctor on duty turned out to be a leading specialist in the treatment of burns. “I was very lucky”, he says.

That wasn’t the only time David had to be rescued at sea. On another occasion, off the coast of Friesland, he was helping to deliver a boat to Germany when its engine failed. The boat was in real danger of drifting on to rocks when a Dutch lifeboat arrived and towed the boat and its crew to safety.

“Both times I was very grateful for the availability of good equipment, well-trained crews and people willing to risk their lives to help me,” he told the Rotarians.

Today, David is honorary secretary of Durham branch of the Royal National Lifeboat Institution which celebrated its 21st birthday in 2015 and was honoured for the outstanding work of its supporters.

Since the Institution was founded in 1824, it has saved over 141,500 lives – equivalent to the population of a city the size of York.

Its lifeboats cover some 19,000 miles of coastline around the United Kingdom and the Republic of Ireland from 230 coastal stations and rescue the equivalent of one person every hour of every day throughout the year. But despite their efforts, 170 people died in water-related incidents around the UK coast last year.

“Our lifesavers”, says David, “are ordinary people who do extraordinary things”.

Virtually all of them – that’s 4,800 crew members, another 3000 shore crew and station management personnel, and 20,000 community fundraisers – are volunteers. “Without them, we simply could not save lives at sea, says David.

Life-saving services cost £168million every year (over £5 per second of every day) and all of the money is raised through voluntary donations and legacies.

The Institution gets no government aid for its work in providing lifeboats, lifeguards, inland flood rescue, safety advice and education.

Urgent help, says David, is still needed locally. “We are very grateful for financial gifts of any kind, but what we really want is people’s time,” he told Rotarians. “If anyone can spare a couple of hours once or twice a year, we should love to hear from them”

RNLI volunteers will be collecting in Tesco at Newton Aycliffe on Sunday, February 12, and would be happy to talk about volunteering with the RNLI locally or how to make a donation.