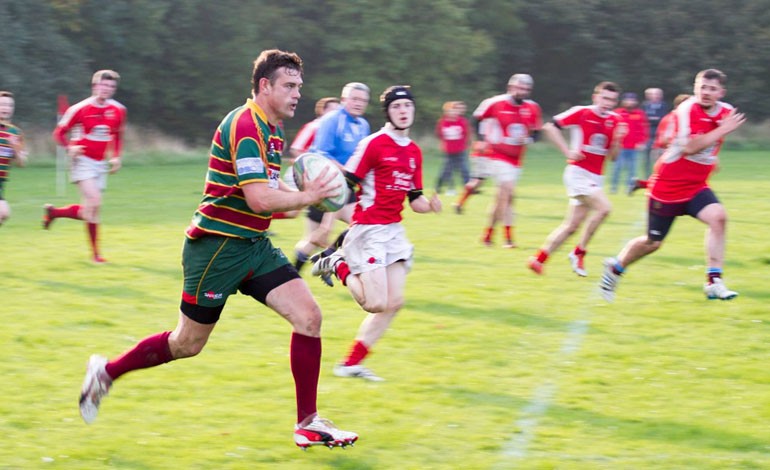 Newton Aycliffe 1st XV had a last minute rearranged fixture away to Seaham Rugby Club at the weekend.

Due to players already making plans for the weekend seven first team regulars were unavailable to play, meaning the team had to pull on its resources.

In years gone by this would have posed a problem for the club, however due to the strength in depth they now possess, the team that took to the field would have proved tough competition for any team in the league.

Aycliffe arrived at Seaham’s new ground in good time but did not anticipate the half-mile walk to the pitch. Once they arrived at the field it was apparent that the match would not be a free flowing, fast game that Aycliffe like to play, as the pitch would have been better suited to grazing animals then playing rugby! Nevertheless, the team was primed and ready for what is a notoriously physical encounter.

Aycliffe won the toss and chose to play down the hill in the first half and kick off. The team struggled to get in to their stride early on with a mixture of new combinations and poor pitch conditions not helping. After 15 minutes Aycliffe broke the deadlock with some strong forwards play, slick backs handling and a great finish in the corner from Gareth Parsonage. Alex Lineton converted from the touchline to take the away team in to 7 – 0 lead.

The forwards pack then took more control of the game, with their power and fitness proving too strong for the seaside club. New prop, Daniel Peck, bulldozered his way over the try line to record his first try for the club and take the lead to 12 points.

Connor Blakey who finished off a great team try with a run in for 20 meters completed the first half scoring and Lineton converted. At this point in the match Aycliffe were very dominant and a number players, including abrasive hooker Dale Paterson who was adamant he was the better option, could have easily scored the try!

At half time the score was Seaham 0, Aycliffe 19.

Seaham made some changes at half time and came out of the break a more aggressive outfit, helped with a down slope and tail wind. They pegged Aycliffe back in their own half for a while and made some strong runs that saw some big midfield collisions in defence.

Aycliffe worked their way out of their own half and eventually put pressure back on to Seaham, which resulted Gareth Parsonage scoring his second of the match.

With the 24 point advantage Aycliffe started making changes to players on the field. This did not diminish from the attacking nature of their play with every player keen to get their hands on the ball and make an impact on the game. After a solid scrum the backs pulled a move straight off the training ground and Luke Crossen sliced his way through the defense to score under the posts, which Lineton converted taking the lead 31 – 0.

With both teams now tiring the game opened up and the Aycliffe forwards started breaking the Seaham defense with ease, lead by gurning number 8 Andy Littlefair. One of these breaks was supported by Craig Holmes who galloped home to score a great try taking the lead to 38 with Lineton’s kick successful.

Next LIttlefair linked up well with veteran scrum half Warren Parsonage to find good field position for the backs to once again cut through the defense as Luke Tinkler scored and took the lead to 45 – 0.

By this point Seaham had all but thrown in the towel and Aycliffe were in control of the game.

The final try of the game came from back row forward Derek Cairns who powered his way in to the corner. Derek finished off another great team effort and was delighted to get on the score sheer as he makes his way back from injury.