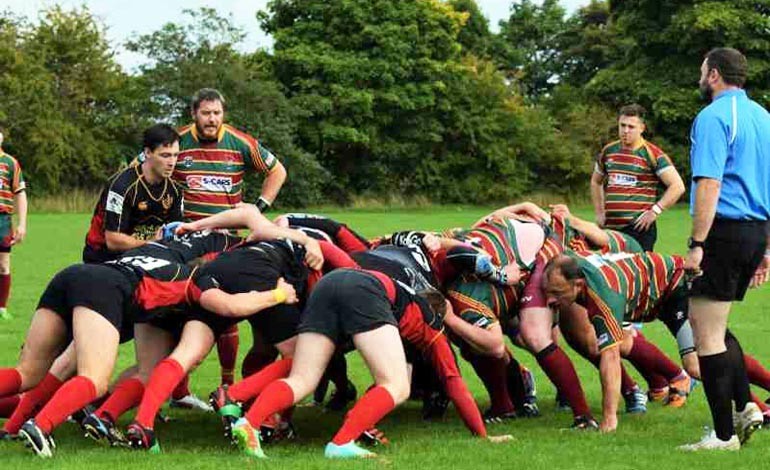 “I have played at Newton Aycliffe, man and boy, for 20 years and that was possibly the finest performance from an Aycliffe team I have ever had the fortune to play in,” said Parsonage.

The eagerly-awaited fixture was a massive test for both teams who were both in fine form.

South Shields, renowned for their ferocious forwards and workmen like backs, had easily beaten the three teams they had faced so far this season.

Aycliffe, on the other hand, whose confidence was soaring after three high scoring victories with only a few points scored against them, felt they had something to prove against their promotion rivals.

With several players away Aycliffe were still able to select a very strong squad, which included a tanned Neil Morgan fresh back from his honeymoon.

The Moore Lane pitch again looked superb in the bright autumn sunlight. Aycliffe received the kick off and a large crowd gathered to watch the events of the day unfold.

From the kickoff Aycliffe attacked and to be fair, this was the overriding feature of the match.

They were constantly on the front foot with the backs, as they have in previous weeks, able to express themselves beautifully. James Cocks orchestrating every attack from the stand off positon with precision.

Aycliffe forwards, a hardy breed, took it upon themselves to continue where they have left off in every game so far this season, out scrummaging South Shields from the start.

Veterans Bob Malvern, Mark Affleck and John Whitehouse, despite their aging and aching bodies, put in a massive shift around the park building the foundations for a dominant Aycliffe pack performance. The Kelly brothers Niall and Liam produced another powerful, aggressive display.

Aycliffe’s back row saw the return of Paul O’Donnell and Captain Andrew Littlefair, whose partnership alongside John Whitehouse at 6 spoilt everything South Shields attempted to do.

This powerful combination of forwards enabled Aycliffe’s backs to have the freedom of the park to entertain the large crowd with some dazzlingly displays of skill.

The first half was relatively close score wise, but not in territory or possession. Prior to the half time whistle South Shields club legend Clayton Fox, whose repeated attempts at provocation had finally reached boiling point, leading to a minor scuffle with Liam Kelly and after several blows were exchanged by both players, the referee decided they should both receive a red card.

Both of Aycliffe’s first half tries were scored by powerful centre James Thacker and both were converted by James Cocks. Halftime score 14 – 0 to Newton Aycliffe.

The second half turned into a rout. Without their Captain and talisman South Shields Marine School appeared rudderless. The Aycliffe team, on the crest of a wave, continued their domination from the first half. Tries began to flow with Andrew Littlefair, James Thacker’s third and Adam Gascoigne all getting their names on the score sheet.

A beautifully flighted kick from James Cocks saw Luke Tinkler surge through South Shields’ defence to catch the ball on the full, before beating several defenders to score under the posts.

Aycliffe were now so dominant that they emptied the bench, allowing the full squad to partake in the party atmosphere that was developing at the ground. James Thacker went on to score his fourth try and Jonny Griffiths beat several players to score his usual X-cellent try. James Cocks finished the game with 6 conversions and a penalty.

• Aycliffe’s second XV had 18 players all geared up and raring to go against Horden 3rds, when out of the blue Horden cried the game off. A bitterly disappointed second team were forced to train prior to the first team fixture.