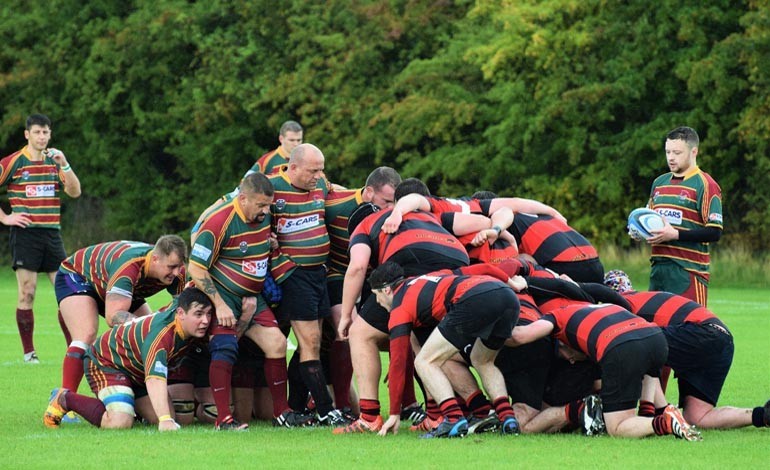 Newton Aycliffe travelled to Jarrovians on a red hot summers day in the middle of September, which is usual for Jarrow as their open pitches are usually like a wind tunnel.

Newton Aycliffe were expected to win this game comfortably, but several enforced changes meant that it was a new look team that took the field at 3pm.

Head coach Peter Ryans spoke to the players before the game, asking them to put together a controlled and disciplined performance.

The match kicked off and for the first 10 minutes of the game, this did not happen.

Jarrow’s rugged defence and good rucking, prevented Aycliffe from dominating as they would have liked. Ever reliable Jonny Griffiths was the first to cross the line, after exceptional passing in the backs. Luke Tinkler kicked the conversion.

The next try came from Captain for the day, Liam Kelly, who for the fourth time this season powered over the line from within five metres, taking several defenders with him. Luke Tinkler once again converted.

Aycliffe forwards now began to realise that if they produced good, clean ball from rucks and the set piece, then the backline could attack Jarrow’s defence at will.

The biggest change so far this season has been the vast improvement in Aycliffe’s scrummaging; as for the third week in a row the pack has been completely dominant up front, destroying another strong pack in the scrummage.

Due to a change of personal in the forwards, Aycliffe used winger Griffiths in the lineout to great effect, spoiling Jarrow’s ball in the first half.

The tries now began to flow as Tinkler crossed under the posts after excellent hands by the back three.

Adam Gascoigne scored the first of his three tries with his outstanding pace leaving the Jarrow defence in tatters as he sped past.

Newboy JJ Rudge, playing for the first time in front of his father, finished off one of the tries of the season.

The well worked ‘double S’ move, saw the whole backline crisscrossing and switching in the midfield, before JJ scored in the corner.

JJ’s second try came soon after when he ran untouched, due to a massive burst of pace, from the half way line to go under the posts. Tinkler kicked his fourth conversation of the first half to finish 38-0.

The second half kicked off with Aycliffe allowing Jarrovians to drive over from close range.

Gascoigne’s second and third try came in close proximity to each other, yet again he glided through the defence after beautiful passing along the backline.

Aycliffe’s brilliance in the backline was built upon the foundation created by the ferocious running of Craig Holmes and Warren Parsonage who constantly put Jarrow on the back foot.

But Jarrow were not easily perturbed and it was down to the hard work of John Whitehouse and the tenacious tackling of Niall Kelly that kept Aycliffe in the driving seat.

Jarrow came back again with another try from good work by their strong pack, scoring again in the bottom left corner, making the score 50-10.

Tinkler then had to leave the field due to a nasty cut on his right eye after he tried to use his massive head to stop Jarrovians biggest player.

Spurred on by Tinkler’s uncharacteristic bravery, Aycliffe entered a golden period running riot for the last 10 minutes of the game.

James Thacker, who had been selfless all game, finally got the try his hard work deserved – brushing off two defenders to go under the posts.

The highlight of the day came when Thacker made a break from within our own half, scything through the defence before getting stopped 15 metres out.

It was at this time that veteran debutant Mark Silvester, who had ran himself ragged all day, popped up on James’ shoulder to charge under the posts.

The final try of the day was an absolute ‘worldie’, as Gascoigne and Thacker kept the ball alive wonderfully before releasing Griffiths who side stepped three players to score his second of the day. David Judge, half man half bandage, kicked the last three conversations. Final score 71-12.

Veteran prop and club stalwart Bob Malvern, overcome with emotion, said after the game: “It is an absolute honour to, along with Mark Affleck and Liam Kelly, build such a strong foundation for our pack to move forward and our backline to have the freedom of the park to express themselves.”

Special mention must be made to Chris Wilson who scored three tries and a man of the match performance from Connor Blakey.

It was also a special day as three lots of fathers and sons played in the same team. Tommy Cooper and Mikey Dunn, Terry Parsons and Jack Parsons, and Stu McLean and Jason McLean.

Captain Darryl Petit said: “The second team at Newton Aycliffe are a valuable asset to the club and we want everyone to enjoy their rugby. We invited anybody, whatever their ability, to come down to Moore Lane and join us.”