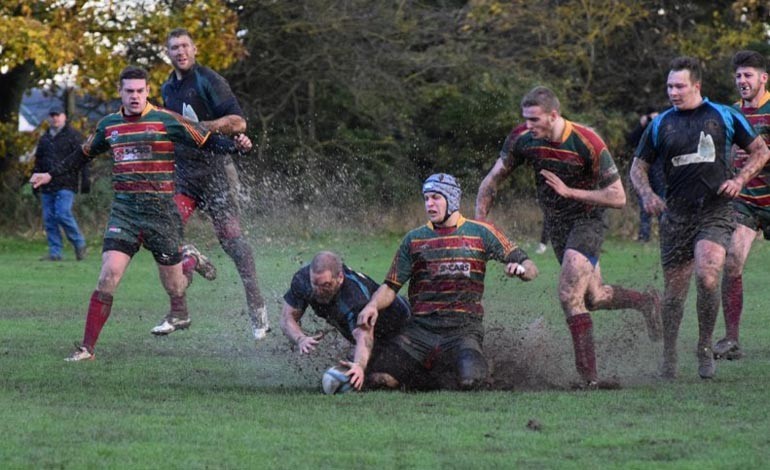 Newton Aycliffe continued their impressive season with a comfortable win at home to Chester-le-Street.

The Moore Lane Pitch looked beautiful from a distance as the sun broke through the dark grey clouds an hour before kick off.

However the previous 24 had dumped gallons of water on the lush green pitch which surprisingly was struggling to absorb it all hence the field had many, many puddles across its full length and width.

Rumour had it that the standing water would play into the hands of the big Chester-le-Street forwards and Aycliffe’s backs would struggle with the clarty slippy ball. With this thought in mind the boys took to the pitch.

Two games running now Aycliffe has fielded a really small (in height) front row Mark Affleck, Jamie Whelan and Bob Malvern even in their high heels they struggle to reach the bar. Height isn’t everything, what these guys lack in inches they made up for in guts and determination not to mention plenty of skill.

The weather dictated this was never going to be a classic running game, mistakes from both sides created more scrums than usual. This area of the game produced plenty of ball for Aycliffe and the backs showed plenty of endeavour James Cocks bullied his way through the visitors defence and crashed over the line after ten minutes.

What followed 15 minutes later was possibly one of the best tries scored at Moore Lane in many a year. Chester-le-Street cleared their lines with a wonderful forty yard kick pinning NARUFC back deep in their own half a beautifully worked lineout saw the forwards drive the opposition back ten metres before scrum half Nick Coates, fed Cocks who unleashed the backs glorious passing and movement saw Jonny Griffiths receive a long pass from Gareth Parsonage forty metres out he danced round the defence to splash down under the posts, what a team try! Cocks converted. A short while later Jonny again scored after great work by the forwards and a little bit of Luke Tinkler magic. Cocks again converted.

Aycliffe kicked off the second half and it wasn’t long before replacement James Thacker got into the game feeding Adam Gascoigne to slide between the defenders to send a Tsunami of water on to the cricket field.

The half-time chat fell on deaf ears for the next quarter-of-an-hour as Chester-le street got back into the game, territorially. The only thing that kept them scoreless was their refusal to attempt penalty kicks from thirty plus metres and Aycliffe’s manful defence epitomised by a back row consisting of Paul O’Donnell, Captain Andrew Littlefair and John Whitehouse. All the other team members took up the shout of “Thou Shalt Not Pass” and the defensive line held tight no matter what Chester throw at them.

Aycliffe capitalised on one or two of the visitor’s errors and again reclaimed dominance. After more excellent lineout ball, the back struck at the heart of the Street defence after the attack was halted just outside the defenders 22 metre line. Craig Holmes drove on, with his team mates support they created great ball for the backs to unleash Thacker who stepped inside and somehow managed to beat four or five defenders to score his Twentieth try of the season Coates Kicked the conversion.

Chester-le Street gave it one final burst of effort and managed to cross the line but again remarkable defence saw a last gasp tackle by what appeared to be the full team, cause the ball slip to from the attackers hands and as quick as a flash “The Firsts” were back on the attack the whole team drove, rucked and ran the ball from their own try line up to Chester-le-Streets twenty two for Gascoigne to score his second of the game Coates converted.

“Despite the atrocious playing conditions it was a pleasure to watch the first play today,” said the club’s ex-chairman Brian Parsonage. “It’s hard to pick out individuals, but I thought my two sons Warren and Gareth were CLASS.”