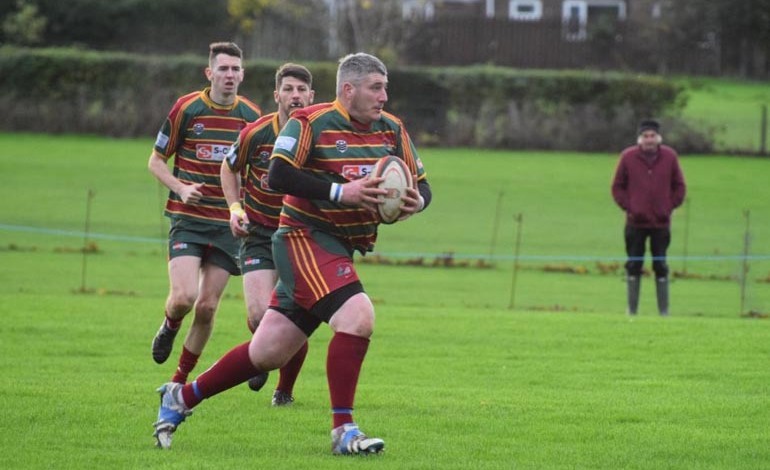 Newton Aycliffe travelled to the little village of Stocksfield to play their tenth league game of the season.

Apart from the smell of burning rubber the journey on the coach was uneventful except for one passenger who foresaw death and destruction around every corner.

Arriving at the ground safely spirits were high and everyone was looking forwards to a good game. The weather conditions were great no wind, bright most of the time with a few clouds the playing surface was good and the pitch had a bit of a slope.

Aycliffe played down the slope first half and on receiving the kick off from their hosts.

The boys laid down a statement of intent, catching the ball deep in their own half, the forwards drove into the heart of Prudhoe’s defence.

The ball was shipped beautifully to the backs and the first of many free flowing attacks followed. Within a few minutes Luke Tinkler danced through the defence to score the first of Aycliffe tries.

More tries were to follow with Tinkler at the heart of most of the good play NARUFC produced.

James Thacker playing on the wing crashed over for another, followed by Adam Gascoigne and then another from Thacker. The score rattled up to 22-0 in no time. Tinkler getting his second after running and stepping through the Prudhoe defence, some how managed to hurt his hamstring in the process and was replaced by Luke Crossen.

Neil Morgan got on the end of a mesmerising run from inside his own half by Crossen to score under the posts. James Cocks converted three of his six conversions in the first half.

The second half was very much a similar performance to that of the first. Aycliffe winning plenty of ball from line outs and scrummage.

The inter play between forwards and backs was pleasing to watch, with both teams playing the game in the right spirit.

Niall Kelly and Jamie Whelan excelled in the forwards their effort was immense especially in the tackle area and the rucks. Adam Gascoigne and Luke Tinkler produced a really high level of skill and ability.

“This is a mighty fine record so far, but the league is over 24 games in total and we are not even half way through.

“Now is not the time for complacency its time now to get stuck in and develop our game so we finish the season as strong as we have started it.

“Today’s game was a pleasure to watch both in defence and attack we were the much better side but to their credit the Prudhoe players played the game with loads of courage and never let their heads drop.”

At this stage Peter drew breath and appeared to have loads more to say but everyone thought it wise to walk away and leave him to his own thoughts.