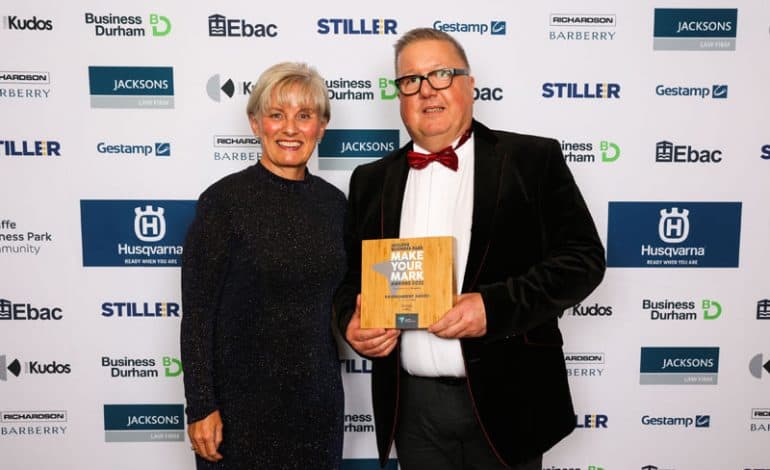 The boss of shower manufacturer Roman says he was thrilled to get local recognition after picking up one of the trophies at the 2022 Make Your Mark Awards, in association with Husqvarna.

The firm achieved has carbon neutral certification from The Carbon Trust, with a huge focus on energy and water usage reductions, in addition to emissions from employees commuting, business travel and the treatment of waste generated in its operations.

Additionally, Roman has been accredited to ISO-14001 since 2009 and is extremely active in embedding the key principles of the circular economy throughout all aspects of its manufacturing processes and material development.

“Turning carbon neutral is quite important for our industry in building products and very important for hotel groups and that sort of thing,” said the firm’s CEO David Osborne.

“It’s commercially very good, as well as environmentally, and that’s a message we need to get across.

“The next thing is net zero but that’s a different challenge – that’s more supply chain and different stuff.”

And after winning the Environment Award at the 2022 Make Your Mark Awards, David said: “We’re thrilled – it’s nice to get some recognition in the local area with lots of peers around us – it’s marvellous.

“We work very hard on all our environmental stuff. It’s very much the focus for us at the moment in terms of differentials in our construction products.

“We’re driving forward an important message for Made in Britain and Made in Europe – carbon footprinting and responsible manufacturing is the future, basically.

“The message from tonight is resonating massively now with the bigger groups, like hotel groups and housebuilders – it’s almost a pre-requisite for tender, which is how it should be, rather than just being lowest cost, and that’s the future hopefully.”

David is confident about Roman’s future despite the ongoing challenges all businesses are currently facing.

He added: “It’s tough times in manufacturing, with lots of price inflation, but we’re just striving hard and trying to keep going to lots of trade markets around the world who buy into the same sort of values we’re talking about – creative design capability and environmental credentials.”

Local manufacturer Ebac sponsored the Environment category, and the firm’s head of HR Carol Jordan presented the asward to Roman.

Ebac executive chairman John Elliott said: “Environmental issues is something we have focused on for over 20 years. We have a water cooler that is more energy-efficient than any other cooler throughout the world.

“So the Environment category seemed like a good fit for us to sponsor this year, and we were delighted to be involved in the awards.

“It was a very special night. The energy in the room was electric. The response of the winner shows how important it is. And it’s always a good sign when the time flies!”.

Click here to see a list of all the winners and shortlists from the 2022 Make Your Mark Awards.