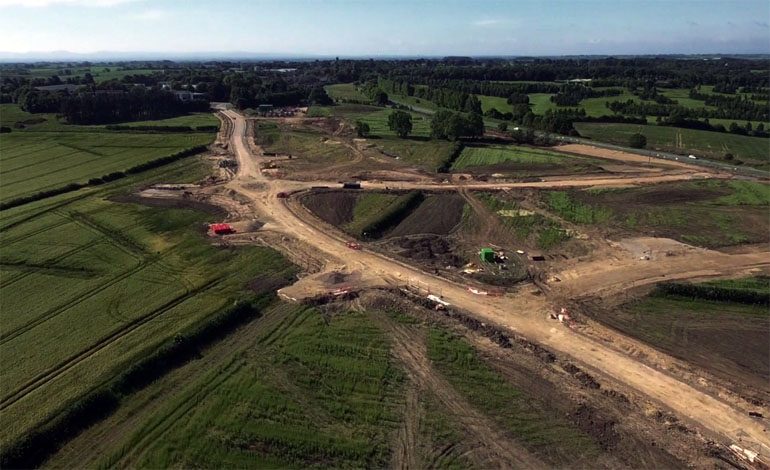 Work has begun on infrastructure works which will form a key part of major expansion plans at a County Durham science park.

Dignitaries from Durham County Council and the North East LEP are among those who are due to gather today (June 28) to mark the construction of a 1km road which will access a further 26 acres of development land at the North East Technology Park (NETPark) in Sedgefield.

The new road and infrastructure works forms Phase 3 of ambitious expansion plans at NETPark to create additional space for research and development companies which need room to prototype and scale up to manufacture on site.

NETPark is already home to some of the world’s most innovative companies and the latest development could lead to the creation of around 1,400 jobs.

The infrastructure works were made possible thanks to a £5m grant from the North East Local Enterprise Partnership (LEP) Local Growth Fund (LGF) last year as part of the North East Growth Deal from the Government. The LGF is a key element of the funding and supports major capital investments which promote innovation, economic and skills infrastructure and sustainable transport across the North East LEP area.

The project will be delivered by Lumsden & Carroll, part of the Esh Group, which has its headquarters in County Durham, and is expected to be complete by the end of the year.

Business Durham, the economic development company for County Durham, which manages NETPark on behalf of Durham County Council, also received £3.2m investment from the North East LEP’s Local Growth Fund towards the cost of the two new £7.6m ‘Explorer’ buildings, which are expected to attract more high tech companies to the park as well as providing a home for those wanting to scale up. It brings the total investment to £12.6m.

One of Explorer’s first tenants will be Ibex Innovations, which started with a virtual office at NETPark and is now at the forefront of x-ray imaging technology with 17 employees. The firm’s technology is being used in industries such as medical, food and industrial imaging.

IBEX and other tenants are expected to move into Explorer as soon as the buildings are complete early next year. NETPark’s dynamic and supportive environment will help accelerate their growth and tap into global markets.

Carl Marshall, Cabinet member for economic regeneration, said: “The start of the infrastructure works marks another exciting stage in the NETPark development and we are confident that even more businesses will be able to grow and flourish as a result of the expansion.

“The plans could potentially provide a further 1,400 jobs in our region, providing a boost to the economy and in turn improving the lives of those who live across County Durham.”

“Many of NETPark’s existing companies have expressed a desire to expand on the park as they know it’s a great place to grow and get the right support to reach global markets. We’ve also had interest from companies outside of the region.”

Hans Moller, innovation director at the North East LEP, said: If we are to create more and better jobs for our region, then we need critical infrastructure that will support the growth of sites such as NETPark and help meet the needs of our innovative and ambitious high tech companies.

NETPark is fast gaining a reputation as an innovation hub par excellence and attracting global attention. It’s good to know that the right infrastructure will now be in place to allow it to continue to grow and develop for years to come.”

Steve Conn, of Lumsden & Carroll, said: “We are delighted to be part of a project that will – literally – give access to innovation, new technology and skills, and ultimately drive jobs to the North East.

“Building the infrastructure may appear less glamourous than other parts of the project but it is the essentially the backbone of the scheme – and what Lumsden and Carroll has built its terrific reputation on.”

NETPark is home to some of the world’s most innovative companies and the development forms part of the 10-year strategy for NETPark, which includes creating 3,000 jobs and adding another £400m to the region’s GVA.