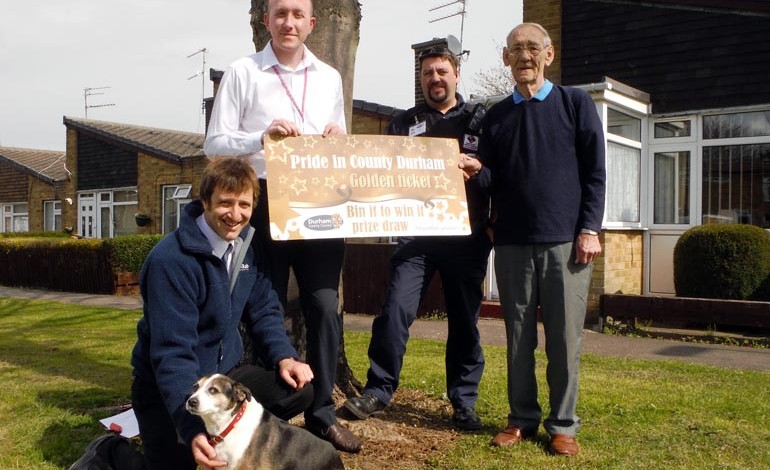 A dog owner who was among dozens seen picking up after their pets in Newton Aycliffe has scooped a cash prize.

Durham County Council’s Civic Pride team visited the West Park area of the town as part of its ongoing Green Dog Walkers scheme, which is aimed at encouraging people to act as responsible dog owners.

The project included a Golden Ticket incentive, which saw anyone spotted cleaning up after their dog entered into a prize draw with a cash reward up for grabs.

The lucky winner was Michael Twig, of Beechfield, who picked up a £25 voucher courtesy of Great Aycliffe Town Council.

In total, 28 Golden Tickets were handed out during the two-week scheme, 35 dogs were microchipped by volunteers from Stray Aid and 25 people signed up as Green Dog Walkers. However, one person was issued a fixed penalty notice for failing to clean up after their pet.

Information was also sent to parents and carers to let them know about the free dog microchipping service.

Pauline Walker, senior Civic Pride officer, Durham County Council, said: “Dog fouling is a blight on our environment, it is unpleasant to look at and can have serious health risks, particularly to young people.

“Most dog owners are responsible and always pick up after their pets but sadly there are some who fail to do so.

“Our Green Dog Walkers scheme aims to change people’s attitudes towards dog fouling in a fun and educational way and we do this by visiting local schools and offering incentives like the Golden Tickets.”

Dog owners can sign up to the Green Dog Walkers scheme by downloading an application form at www.durham.gov.uk/greendogwalkers or by calling 03000 261 000.