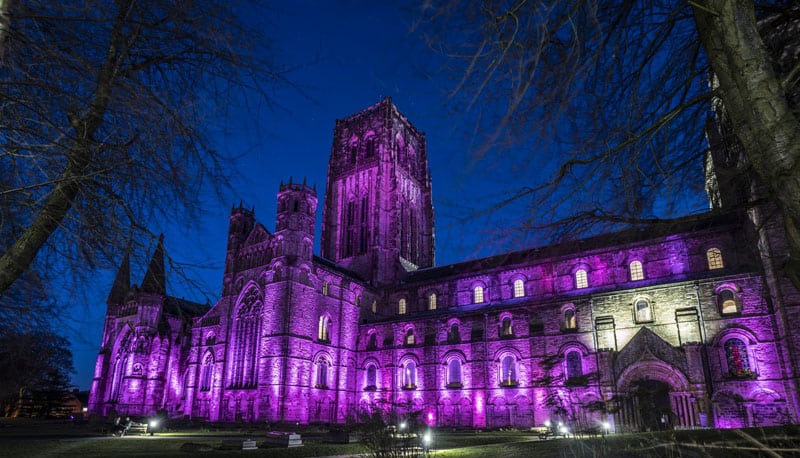 Landmarks in County Durham have been lit up to call on residents to remember to fill in their census surveys on Sunday (March 21).

With households across the county in the process of receiving letters detailing how to take part, Durham County Council and the Office for National Statistics (ONS) are reminding residents to complete their survey on Census Day.

As part of a campaign to keep the census in the minds of residents, both Durham Cathedral and Durham Castle have been lit up purple to remind the public to complete their surveys on March 21.

Most households will receive a census letter which contains a unique access code which will allow residents to complete the questionnaire online. This is the first census to be predominantly online.

The census, which is run by the ONS, is a once-in-a-decade survey that provides the most accurate estimate of all the people and households in England and Wales.

The findings of this year’s survey will be used to understand the needs of County Durham as well as the wider country, allowing everyone from central government to local government and health authorities to plan and fund public services such as transport, education and health.

Information from the census will also help to support charity and voluntary organisations on how and where to provide services and will allow small businesses to gain a greater understanding of their customers.

Cllr Angela Surtees, Durham County Council’s Cabinet member for social inclusion, said: “By filling in the census residents are helping us to better understand the needs of the people we serve in local government.

“It’s quick and easy to do so please set a short amount of time aside to complete the questionnaire and help shape future plans for County Durham.”

Iain Bell, deputy national statistician at the ONS, said: “A successful census will help give the best picture of the needs of everyone living in England and Wales.

“Now is the time to make your mark on history.”

The last census, undertaken in 2011, showed there were 513,242 people living in County Durham.

Of those, 2,133 residents were born in Germany, the top country of birth other than the UK.

There were also 8,445 care workers and home carers, 5,097 nurses and 102 coal mine operatives working in the county at that time.

The questionnaire, which takes around only 10 minutes per person to complete, includes questions about people’s sex, age, work, health, education, household size and ethnicity.

For the first time, there will also be a question asking people whether they have served in the armed forces, as well as voluntary questions for those aged 16 and over on sexual orientation and gender identity.

Following on from Census Day and operating in line with coronavirus guidance, field officers will be deployed across County Durham to contact those who have not completed the census to offer help and advice to those who need it and to remind people that the response is required by law.

Residents are also urged to be mindful about individuals posing as field officers supporting the Census 2021 and to note that officers will be carrying identification and will not enter your property or ask for any bank details.