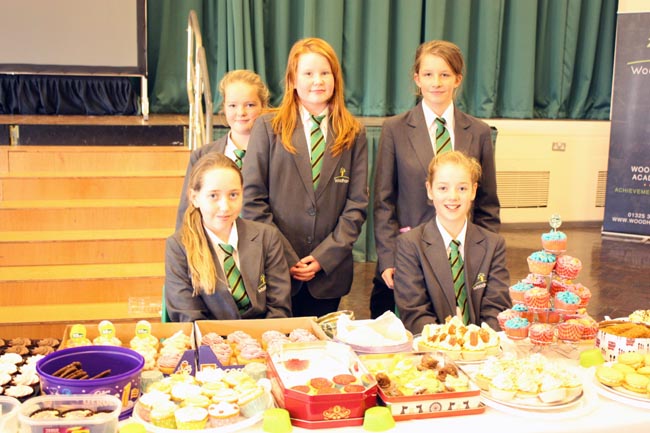 Woodham Academy students prove that raising money for charity is a piece of cake!

Year 7 learners from Woodham Academy raised £383.45 for Macmillan Cancer Support by organising a giant bake-sale at their school. This amount beat all previous records and is, by any standards, a lot of dough.

Not only did youngsters bake, beat, blend, fold, drizzle and pipe their way to this impressive result.

They were also responsible for promoting the event too; so, for a while before hand, brightly coloured posters and cleverly worded endorsements and slogans could be seen pinned to notice boards and classrooms about the premises.

On the day, students took over their main assembly hall and filled it with piles of confectionary.

There were cakes of every conceivable size, shape and variety; there were coffee cakes, strawberry cakes, coconut cakes, chocolate cakes and even a Coca Cola cake (which tasted much better than it might sound).

There were cup-cakes, loaf cakes, butterfly cakes, Victoria Sandwiches, flapjacks muffins and scones in every colour under the sun … although luminescent green seemed the tone of choice.

Some cakes were plain and some were adorned with sparkles, or sprinkles, or transfers of ghouls, goblins and Disney princesses; many pupils had grasped the opportunity to express their artistic side – with spirals of fluffy piping being everywhere apparent.

The choice was overwhelming, as was the buzz when doors finally opened and the public was admitted. It would not be over egging it to say the students’ produce sold like hot cakes.

Speaking to staff it was hard not to feel the pride they themselves felt in the achievements of Woodham Academy’s youngest pupils.

One such staff member, Christine Warburton – a Geography teacher whose own tutor group, 7CW, were involved in the activity, was almost lost for words – although the one she uttered most often was undoubtedly ‘wonderful’: all-in-all, beamed Mrs Warburton, it was a wonderful event, a wonderful effort and a wonderful example of how schools can engage with the issues of the world around them.