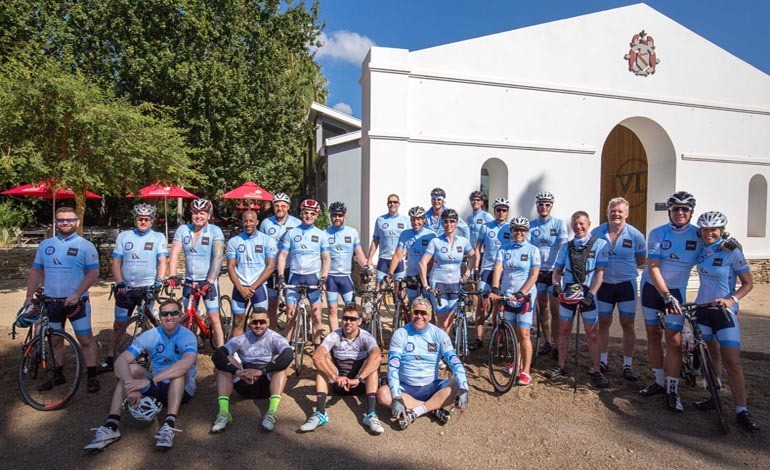 Staff from Newton Aycliffe kitchen manufacturer PWS have helped to raise a whopping £250,000 for charity.

Their feat has helped them powered through their £250,000 fundraising target in aid of Phoenix House, the Help For Heroes Recovery Centre, in Catterick Garrison.

The route represented an immense physical challenge to the injured veterans and support riders alike and the months of hard winter training certainly paid off when they were faced with 22,000 feet of punishing climbs.

The six-day challenge, across the Western Cape of South Africa, started in Franschhoek and was brought to a triumphant close in Knysna, often in very unpleasant and inclement weather conditions, including strong headwinds, hail and heavy rain.

Stephenson said: “What started off as a pie-in-the-sky idea for me, quickly grew to become an exceptional project.

“Blood Sweat & Gears has surpassed all my expectations and turned into something extremely special that stirred up so many emotions for all involved.

“I have a genuine feeling of pride knowing that we will help to change some lives, not only for the incredible veterans who took part, but for many more who will benefit from the money raised.”

Staff at PWS embraced the project, so much so, they instigated their own Watt-bike challenge to coincide with the team cycling in South Africa.

Competing against local company Baltic Training and students at Sedbergh School, the three teams battled it out over 4 days for the greatest cumulative distance.

The money raised from Blood Sweat & Gears will go directly to Phoenix House, to fund psychological wellbeing programmes over the coming years.

The four veterans included Jon Knott, a recumbent cyclist who served in the RAF but was discharged when he developed Multiple Sclerosis, and Sean Donlan, who suffered severe brain injury following an explosion caused by a rocket-propelled grenade.