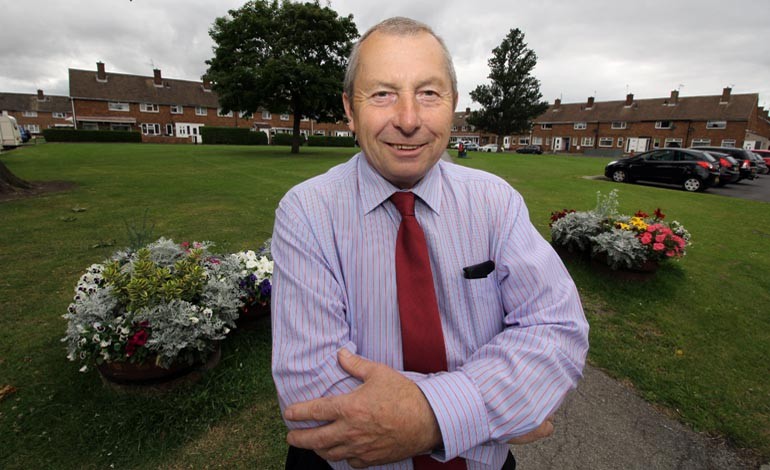 The chairman of a Newton Aycliffe residents group has caused a stir with extreme views saying we should have tougher laws on criminals.

In an astonishing open letter, Ken Robson, chair of the ACORN Residents’ Association and an aspiring local councillor, claims the public will be more “in tune” with his views, which include:

• Public floggings for thieves and fraudsters (perhaps as half-time “entertainment” at football matches), and;

Mr Robson says he was reacting to Durham’s Police and Crime Commissioner Ron Hogg’s “high degree of tolerance to drug use” – and insists it’s the police’s job to “uphold the law, not make it”.

The police boss has been making national headlines since his announcement last week that Durham Police would “turn a blind eye” to Cannabis users.

Mr Robson, who courted controversy in September last year when he accused Aycliffe Town Council leaders of being “environmental fascists” during a row over West Park lake, offers an alternative hard line to Mr Hogg’s views on Cannabis.

“Let me propose an alternative view which is perhaps more in tune with public opinion,” he writes.

“Full frontal lobotomies for burglars who steal a lifetime’s memories from our elderly.

“Public floggings, possibly at football stadiums as half-time entertainment, for fraudsters who prey on the vulnerable.

“Unpaid labour in the community and in the workplace for those who terrorise neighbourhoods with the profit going back into financing the above.”

Mr Robson told Aycliffe Today the letter was intended to create debate after Mr Hogg’s controversial announcement on the personal use of Cannabis.

“Bringing back the rope will never happen because our politicians are too worried about losing votes,” he told us.

“Besides life imprisonment costs too much, even if it is only five years, and a full frontal lobotomy would upset care in the community.”

Mr Robson has even suggested the public floggings would make great reality TV.

“But after the first session there would probably be no takers for a second session,” he joked.

“But the letter has done what was intended and caused a reaction.

“In all seriousness, these are populist concerns and there will be people out there who have been robbed, assaulted and terrorised who will be thinking ‘what a good idea’.”

Labour’s town and county councillor John Clare said: “The first thing I have to say is that – as a contribution to PCC Ron Hogg’s call for a sensible debate about the role of cannabis in our society, and what our response to it should be – Mr Robson’s letter is a massive fail.

“Taking a broader electoral and societal view of the matter, it is one more example of the right wing myth, which often prospers in times of economic hardship, that the answer to our problems lies in a violent state, and on the kind of simplistic, ‘that’ll-solve-it’ panaceas which float round on the social media. A brutal and vengeful state is not going make crime go away.

“What I found most horrific was the call for public floggings as “half time entertainment” at football matches – the use of the word ‘entertainment’ suggesting that he would enjoy such a spectacle.

“It speaks a desire to return us to a medieval barbarism which we ought to be trying to leave behind.
In my experience, everybody is all for tough punishments until you punish them.”

It was highly gratifying this week to read the rebuttal from our police of the crazy policy suggested from Police and Crime Commissioner Ron Hogg.

Mr Hogg would appear to support a policy of restorative justice and turning a blind eye to drugs as the way forward for Durham Constabulary.

The statement from Mr Hogg caused uproar in the media and was a source of dismay to those of us who support law and order in our communities.

Let me propose an alternative view which is perhaps more in tune with public opinion.

Full frontal lobotomy for burglars who steal a lifetime’s memories from our elderly.

Public flogging possibly at football stadiums as half-time entertainment for fraudsters who prey on the vulnerable.

Unpaid labour in the community and in the workplace for those who terrorise neighbourhoods with the profit going back into financing the above.

Which policy would you support? Cannabis is not a harmless drug when used for recreational purposes, it allegedly lowers reaction times, supports local crime, and results in paranoia.

Many companies and organisations test employees for signs of drug use and if found to be positive disciplinary action is taken.

One assumes that the police forces themselves are strictly drug-free too.

At a healthwatch meeting some time ago a lady was applauded for managing to get free from drugs after many years enslaved by them. Her story tells of stealing and all manner of unsavoury ways in which she got the money to feed her habit including selling weed to children who presumably are now hooked themselves and busily getting an even younger generation hooked.

The lady declares that had she returned to her home town she would have been encouraged to regain the habit within days.

It must be said that cannabis is an illegal drug and that it will remain that way until Parliament decides otherwise.

It is the role of our police to uphold the law not make it.

My personal view is quite extreme on the subject of law and order, however at present I am allowed to express my views, but it begs the question for how much longer?