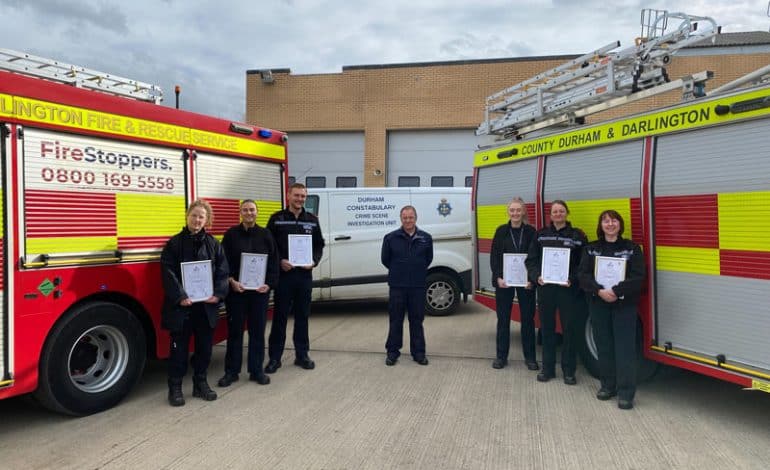 Durham Constabulary has teamed up with the County Durham and Darlington Fire and Rescue Service (CDDFRS) to train six CSIs as fire scene investigators in a bid to combat arson within the community.

The CSIs collaborated on a training program with CDDFRS to qualify to the Skills for Justice Awards in Fire Investigators standard.

The CSI team underwent detailed instruction to learn the theory behind fire science, fire behaviour, post-fire indicators recognition to be able to establish where, when and how a fire may have started, they also looked at methods commonly used by Arsonists to start fires.

The two organisations have worked closely to forensically investigate fires that may have been started deliberately across County Durham and Darlington for nearly 20 years.

The training and practical skills of forensic fire scene excavation took place at CDDFRS’ state-of-the-art service training centre in Bowburn and looked at methods for the recovery of forensic evidence from a fire scene utilising a mix of CSI skills and fire investigation techniques as to where, how, and when the fire started.

CDDFRS fire investigator, arson reduction and young people manager Lee Aspery, who was lead instructor on the course, said: “I am immensely proud of each CSI who has put in the time and effort to become a qualified fire scene investigator.

“Not only will this help with the combat of arson, but it will also allow both services to work closer than ever before.

“I would also like to take this opportunity to congratulate them all, and we are hopeful that we can continue to run this type or training in the future.”

Head of forensic services at Durham Constabulary, Andrea Armstrong, said: “The CSIs have worked extremely hard to become qualified in fire investigation and are a huge asset to the force.

“We are also working at adding Fire Investigation to our ISO accreditation.

“The newly qualified CSIs will add to an already established team and help us work even more closely with our partners at CDDFRS to investigate deliberate fires and bring those responsible to justice.”