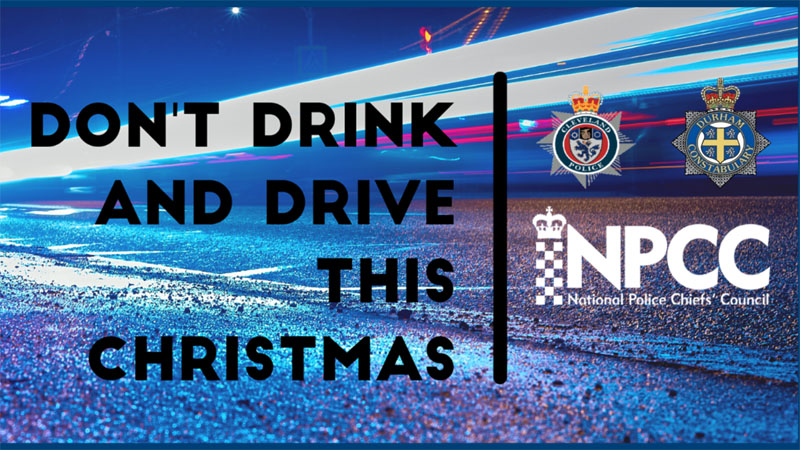 Roads policing officers are once again taking part in a national campaign to target drivers under the influence of drugs or alcohol over the Christmas season.

From Tuesday 1st December, officers from the Cleveland and Durham Specialist Operations Unit (CDSOU) will carry out random vehicle stops and intelligence led enforcement in a bid to remove drivers who are under the influence from the roads and keep people safe.

Police will be out morning and night to catch those who may be flouting the law.

Whilst pubs and restaurants must remain closed under tier 3 restrictions across Cleveland and Durham, police are reminding people who may have a drink in their home to ensure that they don’t drive whilst over the limit the following morning.

Inspector Jamie Bell, from the Cleveland and Durham Specialist Operations Unit, said: “Whilst pubs and restaurants remain closed at the moment, there will be people who fancy a tipple at home over the festive season, which is absolutely fine as long as they don’t get behind the wheel of a vehicle whilst over the limit.

“People will also need to be mindful of driving the following day; they will need to leave enough time for the alcohol to leave their bodies to ensure that they can safely use the roads.”

According to the Department for Transport, an estimated 8,680 people were killed or injured by drink drivers nationally in 2018.

Inspector Bell added: “Whilst we tackle this issue all year round, it is more likely at Christmas time that people may get behind the wheel after a drink.

“It is extremely frustrating as a roads policing officer that some motorists still choose to drive under the influence of drink or drugs in the knowledge that their actions could kill or seriously injure someone else’s loved one.

“Drink or drug driving is completely unacceptable and preventing this risk on our roads is one of our main priorities.”

Drivers risk up to six months’ imprisonment, an unlimited fine and a substantial driving ban if they are caught driving while above the legal limit. Anyone who causes a death while drink or drug driving faces up to 14 years’ imprisonment.