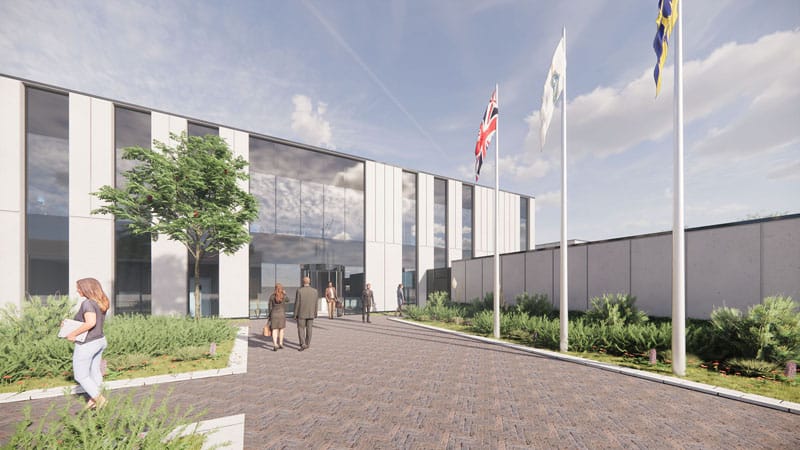 Plans have been submitted by Durham Constabulary to build a new 48-cell custody and investigations suite.

The force has formally lodged a planning application with Durham County Council requesting permission to build the two-storey centre opposite Stanley Black & Decker on the commercial business quarter of DurhamGate, near Spennymoor.

Last year, Government inspectors highlighted “the poor physical conditions” in some custody suites operated by the force and recommended improvements to bring them up to 21st Century standards.

The proposed new centre will provide a safe and modern building which is urgently needed to replace the four ageing custody suites currently in use at Bishop Auckland, Darlington, Peterlee and Durham City, which dates back to the 18th Century.

Because several detainees can be booked in at once, the new centre will reduce the average time that arresting officers spend waiting in custody while prisoners are processed and therefore allow the officers to get back out on the streets more quickly.

Although the four existing custody suites within the existing buildings will be mothballed, the proposal will have absolutely no impact on the number of police stations across the force area: every town which currently has a station will still have one once work is complete.

Alongside modern cells, the £21m custody and investigations centre would include interview rooms, CSI facilities, evidence stores and a virtual court to allow officer and prisoners to save time at court by appearing by video link, as well as other facilities such medical surgeries and forensic examination rooms.

Critically, it would incorporate a number of key safety features to protect police officers and detainees along with the health workers and legal professionals who would work there.

“Most importantly, it will improve our ability to investigate crime and put victims first by ensuring we have the best quality interview rooms and CSI facilities to secure the evidence we need to secure a successful prosecution.

“Even when extra travel time is taken into account, it will mean our cops spend more time on the streets rather than waiting in police stations for hours on end to complete a lengthy prisoner handover.

“Ultimately, that means they have more time to do what they do best: catching criminals, preventing crime and keeping our communities safe, day and night.”

Steve White, Acting Durham Police, Crime and Victims’ Commissioner said: “Following an inspection last year by HMICFRS, it was flagged that our current custody suites across Country Durham did not meet required standards by the Home Office. The cost to renovate existing custody suites would be much more costly in the short and long term, would not provide value for money for the taxpayer and would still not achieve the standard required.

“Any delay in the decision making process would have caused serious detriment, potentially leading to the loss of site needed for such a complex project and it would also likely result in project costs rising due to inflation.

“A new facility would be a safer environment for our staff and officers to work in by enabling full CCTV monitoring systems to be installed, eradicate all blind spots and provide holding areas that would facilitate officers to book multiple detainees in at once. This would have a beneficial impact by allowing officers to get back to the street quickly.”

Officers from Durham Constabulary and staff from the PCVC’s office have carried out a number of engagement events in the area to explain the proposals and address any concerns.

Durham County Council is expected to make a decision on the planning application in the coming months. If approved, the new centre is due to be completed by 2023.