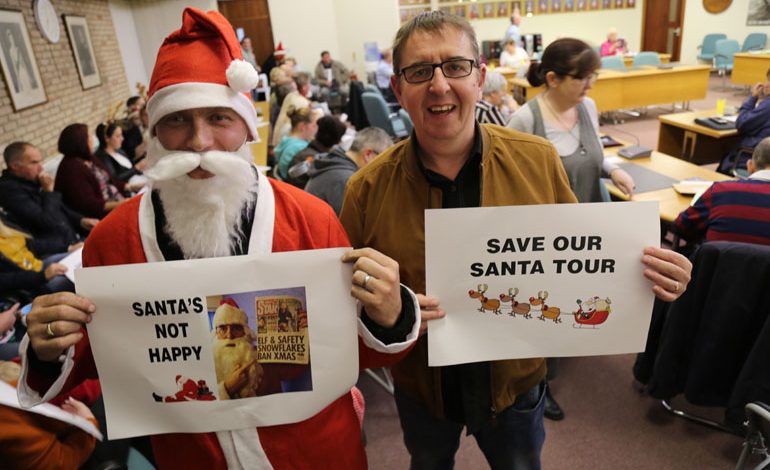 Bumbling councillors sitting on an events sub-committee had proposed to replace the tours element of the Christmas Eve tradition, meaning Santa would no longer tour the streets of Aycliffe on December 24 as he has for almost five decades.

But following a successful online and social media campaign – led by Aycliffe Today and local businessmen Neville Jones and Russ Gibson (pictured above) – the council now says the tours can go ahead as normal after being inundated with offers of help.

This came after our campaign highlighted the issue in the first place and created a social media storm, while the sleepy local ‘newspaper’ badly misjudged public opinion.

Durham Police chief Mike Barton intervened and told the local authority: “It would be a great pity if a one-off festive tradition and the fun was diminished through a narrow and misguided interpretation of traffic law.”

Now council officers are advising the events sub-committee, due to meet on Monday evening, that the matter has “now been satisfactorily resolved”.

Neville Jones, boss of local firm J&C Coaches (pictured above, right), told Aycliffe Today: “This is the best news we’ve had all week!

“We felt the Santa tours had to continue for the children of Aycliffe, it’s one of our oldest and most treasured traditions.

“It was never our intention to cause trouble or upset anyone, we just felt passionately about it and we wanted our voices to be heard.

“This was designed so the folk of Aycliffe could come together for a common goal, to try to influence those in power so that a much-loved town tradition could be maintained.”

Campaigner Russ Gibson, who set up the ‘Save Aycliffe Santa Tours’ Facebook page which amassed more than 5,200 followers, added: “This is the outcome we all wanted and we have to give credit where it’s due to the council for listening to the public and being prepared to admit they misjudged this one.”

When the events sub-committee meet on Monday, they have also been recommended to approve council officers’ actions to increase the numbers of vehicles carrying Santa from eight to up to 12.

This is due to the reduced speed of vehicles and the high demand for Santas to stop off on the routes.

Extra equipment has been ordered to dress any new sleighs while more Santa suits and accessories have been ordered for volunteer Santas. Committee members will also be asked to agree the added costs.