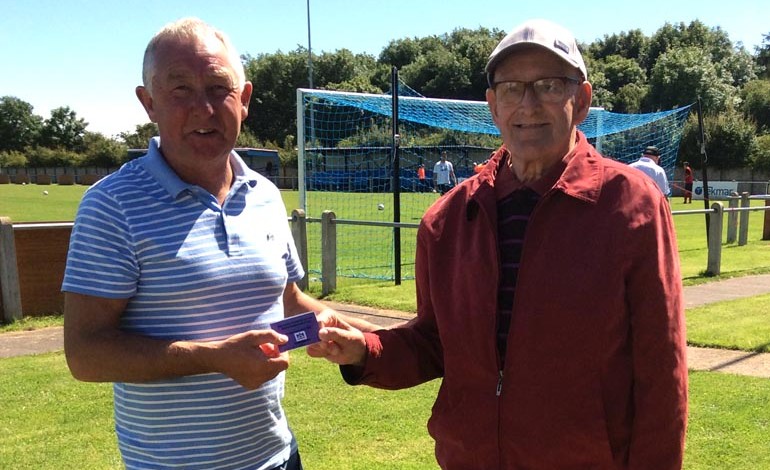 One of Newton Aycliffe FC’s oldest fans is gearing up for the new football campaign after he was the first to grab a 2016-17 season ticket.

Octogenarian Charlie Bussey was so keen to secure his ticket that he paid for it at the end of the 2015-16 campaign – the club’s most successful season ever.

Charlie rarely misses a game, home or away, and followed Aycliffe as far as Camberley in Surrey last season as Peter Dixon’s side reached the last 16 of the FA Vase for the first time in their history.

Aycliffe also won the Durham Challenge Cup last season, reached the second qualifying round of the FA Cup and finished sixth in the Northern League first division – with all achievements surpassing their previous best.

Aycliffe have started their pre-season and played a friendly against Rotherham side Maltby Main last Saturday. Charlie was on hand to receive his ticket from club chairman, Allan Oliver.

The match ended in a 1-1 draw with last season’s top scorer, John Campbell, getting Aycliffe’s goal.

Aycliffe now look forward to three games in a week as they prepare for the season next kick-off month.

An away tie to Brandon on Tuesday 19th July is followed by home matches to Darlington RA on Thursday 21st and Northallerton on Friday 22nd, in the annual Frank Swinburne Memorial Trophy game, honouring the popular club stalwart.

The first competitive game of the 2016-17 season will be the FA Cup on 6th August where Aycliffe have been drawn away to Washington.

Season tickets are £100 for adults, £60 concessions and include free admission to all home friendlies – application form are available from the club’s website www.newtonaycliffefc.co.uk.