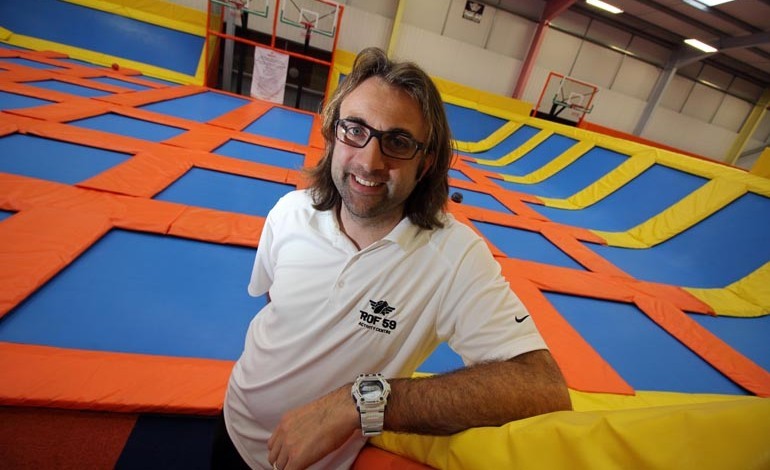 A PE teacher has taken on a new role at the ROF 59 activity centre on Aycliffe Business Park as the complex opened its state-of-the-art trampoline park.

Peter Ramsey has been appointed leisure manager at the family fun venue, which has been built on the site of a former World War II munitions factory.

The 38-year-old father-of-two left his PE teaching job at King James I School in Bishop Auckland in the summer to take on the “exciting new challenge” at ROF 59.

“I saw it as a fantastic career opportunity for me,” said Peter, who has also worked as a school sport co-ordinator for Wear Valley and Teesdale School Sport Partnership.

“I’ve always been keen on encouraging young people to get involved in non-mainstream sports and ROF 59 provides a brilliant venue for me to do that with the trampoline park and climbing walls.

“My role is to get engaged with schools and local groups. It’s an exciting new challenge but I’ve already enjoyed getting my teeth into it and I’m looking forward to making ROF 59 a great success.”

Peter, who introduced archery and fencing to PE classes in his previous school role, now oversees two team leaders and four core staff within the activity centre of ROF 59, which has created more than 20 full and part-time jobs across its 70,000 sq ft site.

The complex also features a maze of climbing walls for climbers of all abilities – including one of the biggest in the country, standing at 20 metres tall – as well as 75 trampolines, a bar and a restaurant.

“It’s fundamentally a fun facility for people to come and enjoy themselves, but there’s also a serious side to it,” added Peter.

“Safety is paramount and we feel it’s important that the staff interact with the people who are using the trampolines, and not just stood on the side waiting for something to happen.

“Our staff will get involved, they’ll play games and provide advice on safe trampolining, which will improve the user experience massively.

“Also, there might be really naturally talented trampolinists or rock climbers out there and they don’t know it yet. ROF 59 will hopefully help to discover some hidden talents, so we’re looking at putting on classes for some of the more advanced trampoline users later once we’re established.

“We’re already seeing kids coming in to have a go at the adventure wall who are moving on to the advanced climbing walls with Rockantics, which is great to see.”

ROF 59 has been built on the site of the former Presswork Metals factory on Durham Way South after owners Finley Structures invested more than £1.1m in creating the new facility.

Almost £750,000 was spent on constructing a new steel frame for the venue and a further £400,000 was spent fitting out the inside of the new building, which includes a bar/lounge, named The Bunker, and The Blitz restaurant.

Finley Structures managing director Julie Finley said: “ROF 59 was designed for families and of course the emphasis is very much about people coming here and having fun.

“But we felt it was important to have someone with experience to run the activity centre side of the business, and we’re delighted to have Peter heading up that side of the operation.

“His experience of dealing with young people and teaching sport will be invaluable.”