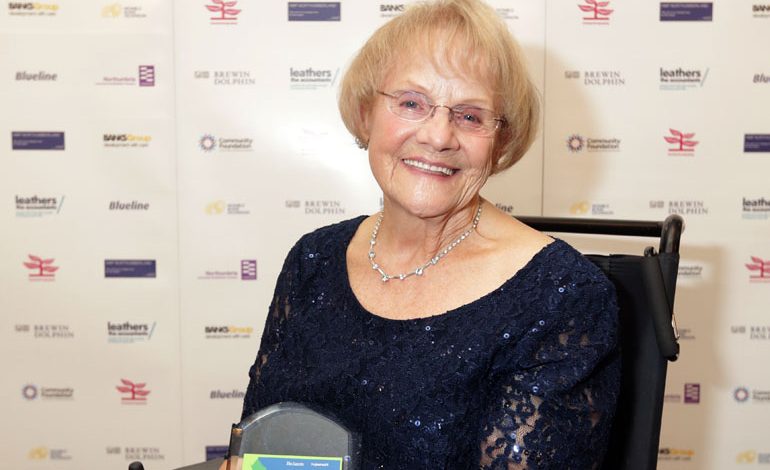 Community champion Carol Briggs has scooped the overall winner in the category of ‘Outstanding Contribution to Charity’ at the prestigious North East Charity Awards.

The competition was strong with some amazing volunteers and trustees who have shown the greatest commitment and achievement for their chosen charity and Carol was overwhelmed to be crowned the best in the North East.

Carol received the award with a great deal joy and excitement, her well-deserved award was presented in front of a full house of other fantastic nominees and Carol was supported by her PCP friends along with close family.

She has been involved with numerous local disability groups since 1979 and supported the Pioneering Care Partnership since it first opened in 1998.

“I am truly honoured to have won, it was fantastic to be nominated and I was a bit shocked when my name was called out,” said Carol.

“I always say I get as much out of volunteering as what I put in, but it is very special to be recognised especially as my son and daughter and their partners are here with me too.

“I’m passionate about supporting people and communities and love working with the Pioneering Care Partnership. I am very proud of all PCP achieves and am excited for the future.”

Carol was nominated by PCP chief executive Carol Gaskarth, who said: “Carol is a very practical hands on person and is extremely compassionate and caring.

“She was instrumental in establishing PCP and the Pioneering Care Centre over 20 years ago and she is still as enthusiastic and dedicated to the organisation as she was in those formative days.

“Carol has guided and helped lead PCP to grow from a group of willing volunteers to a highly respected charity with a focus on improving health and wellbeing, which now operates across the North East. Well done Carol from all of us at PCP – we are thrilled for you.”