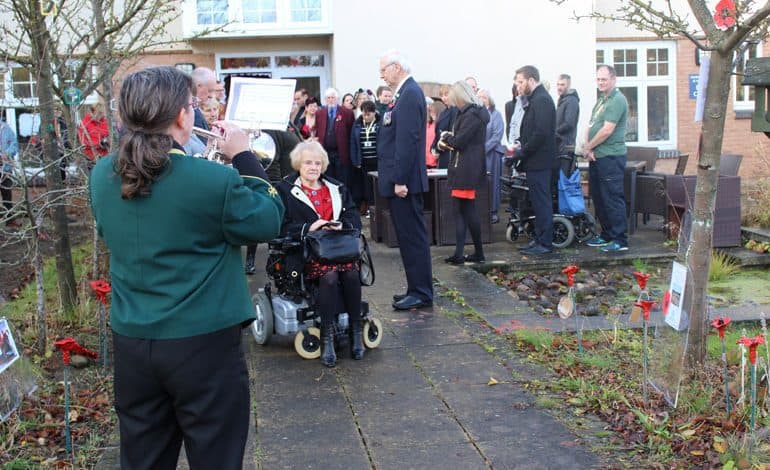 The Pioneering Care Partnership commemorated the 100-year anniversary of the end of World War I as part of nationwide programme of events sponsored by the Covenant Fund Trust.

At PCP’s Step Back in Time event, visitors saw memorabilia from Beamish Museum, RAFA Befriending Service, the Territorial Army and others, Darlington College provided “A Country at War Presentation” in Foster Room and supported people with research in the computer suite.

PCP chair Barry Knevitt said: “During the four year period of the First World War it is estimated that over 19 million service personnel and civilians lost their life and the war led to the deaths of over 888,000 people from Britain and the Commonwealth.

“Many veterans suffered life changing injuries and emotional scars that lived with them long after the conflict had ended and families were torn apart and never reunited. The aim of PCP’s event was to honour and remember them all.”

Visitors were welcome by staff were dressed in period clothes and the centre was decorated with flags, while post-war music played in the background.

PCP welcomed an Aycliffe Angel, Jenny Race, 95, who worked in the munitions factory in Newton Aycliffe during World War II.

Jenny, along with 17,000 others, worked a three rota filling shells and bullets and assembling detonators and fuses for the war effort in the top secret factory.

Jenny enjoyed stepping back in time and reminiscing with others, her key to a healthy life was to get out and about at least 4 times a week, it keeps the brain active!

Phil Wilson MP, who opened the event, said: “Today is special because we are commemorating 100 since the end of the First World War.

“This whole area has a debt of gratitude to pay to all those men that fought. Over 1500 lost their lives in Sedgefield alone, in some instances villages lost up to 40% of their population.

“War is something that touches everyone, my own Grandma was an Aycliffe Angel and is something as politicians we try to avoid. Our serving men and women take incredible risks every day to protect our country and fight terrorism.

“So it is only right that we come together today to commemorate them and remember those no longer with us, but have helped secured our freedom.”

A minute’s silence was observed at 11am, while a lone bugler from Aycliffe & Brancepeth Brass Band played the last post which was followed by a memory walk in the garden.

Over 250 people attended the event and PCP would like to thank all those who gave up their time to support the day.