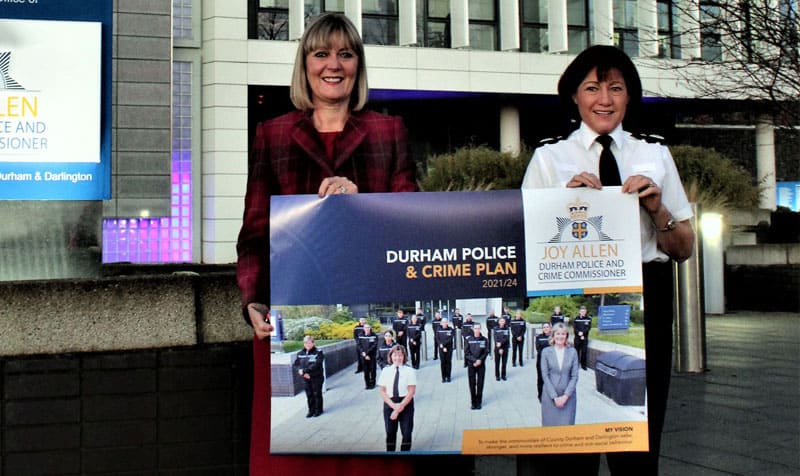 Police and Crime Commissioner Joy Allen has unveiled her blueprint for a safer County Durham and Darlington, promising to deliver on the improvements local people have asked for.

The PCC has reached out to the communities in the Durham Police area in her first six months of office to understand exactly what areas of crime and safety matter most to them and impact on their quality of life.

The results have enabled Mrs Allen to develop a robust three-year action plan to help improve life for local people, reduce their risk and fear of crime, increase their confidence in reporting crime and target policing resources where they matter most.

Working closely with Chief Constable Jo Farrell to ensure the Force delivers on her ambitions, the PCC has pledged to do everything in her power to reduce crime and antisocial behaviour. Her Plan makes clear her commitment to work with partners and local communities to support their work to protect victims and vulnerable people.

It covers her expectations in terms of cutting offending and re-offending; to effectively pursue criminals, and to reduce death and serious injury on the roads.

“I’m working hard to make County Durham and Darlington areas where people have confidence in policing and the criminal justice system, victims and vulnerable people feel supported, and all communities are safe.

“The priorities identified are the public’s priorities – I have listened very carefully to people’s experiences of crime and policing in setting these ambitious goals.

“Local people rightly want to see a stronger policing presence in their neighbourhoods. They want to know crime is being disrupted at every level and that the police will be there to help them should they ever need it. These aims will be at the heart of everything we do but in support of this work I will place stronger emphasis on prevention and giving those at risk of becoming perpetrators in the future the opportunities they need to change course.

“The Police cannot solve crime alone. To build truly resilient communities, we need the knowledge and expertise of everyone living and working within them, private businesses, voluntary organisations, residents and partner agencies. We need to work together as one team.

“We have achieved a lot in my first six months, bringing millions of pounds of extra funds into the county and Darlington to improve safety on our streets and step up the response to domestic violence. This Plan gives us the momentum to continue that progress and make a difference in the areas that local people want.”

“That commitment was recognised in the recent HIMICFRS inspection report which highlighted the outstanding work of our officers and staff in disrupting organised crime and delivering value for money.

“The new Police and Crime Plan will allow us to build on that success and we are looking forward to working with residents and our partners to deliver real results for our communities.”

Feedback from local consultation revealed that antisocial behaviour (ASB), drug use and drug dealing, fly tipping, speeding and vandalism were the main areas of concern.

It also highlighted 34% of respondents who had been a victim of crime did not report it to police while 68% found it difficult to report issues.

In response, the Commissioner has pledged to make it easier, faster and more convenient to report crime and ASB and give residents the confidence and reassurance they need to report issues in the future.

Progress has already been made on many of the priority areas since May 2021, laying the foundations for future success.

Among the many achievements to date are:

• The appointment of an Antisocial Behaviour Champion
• Support for the development of the multiagency partnership Horden Together Hub (allocating £150k towards the project)
• The recruitment of extra police officers, PSCOs and 101 call handlers
• On the national scene she has been appointed as the joint lead for the Association of Police and Crime Commissioners for Addiction and Substance Misuse and also Environment and Sustainability matters
• The appointment of a Victims Champion and Domestic Violence Champion