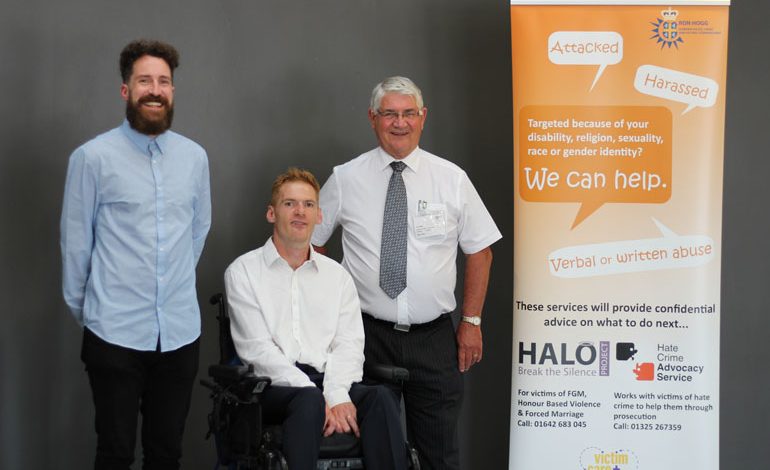 Practitioners across County Durham and Darlington were planning their future work together for tackling hate crime at a conference held in Newton Aycliffe this week.

The conference was opened by Mr Hogg, and chaired by James Kingett, from Show Racism the Red Card.

Delegates were delighted to receive a speech from Stephen Miller, the Paralympic Gold Medallist as the key note speaker.

“It was great to be back to address the Hate Crime Conference,” said Mr Miller.

“Whilst there is always more to do, it was good to see what has already been achieved. It is so important that we continue to address this big issue.

“I often remind people that respect is the highest currency we have. I believe events like today help to strengthening the message that hate crime won’t be tolerated.”

Over 100 delegates attended the conference, which was hosted by the Ron Hogg, Police, Crime and Victims’ Commissioner (PCVC).

Hate Crime remains a key priority for the PCVC, and has been throughout his tenure.

Mr Hogg said: “Reducing the impact of Hate Crime remains one of my priorities. Today’s Conference builds upon my previous seminars on hate crime.

“We have listened to what people have said and I am pleased that good progress has been made towards tackling hate crime locally.

“However, I recognise that there is still much to do. I note that the number of recorded hate crimes has risen, and am pleased this appears largely to be because victims are increasingly confident to report incidents to the Police.

“People in this area continues to show higher levels of confidence in policing than in many other parts of the country.”

The conference heard four brave hate crime victims share their stories, to show the positive and negative aspects of their experience.

In addition a video was also show which highlighted the prejudice which a Syrian refugee family faced after being housed and settled in the North East.

These presentations showed that despite a low number of reported incidents across county Durham and Darlington, hate crime is happening within our communities and that victims need support.

Students from the Hermitage Academy Chester Le Street were in attendance. They delivered a powerful presentation on the holocaust.