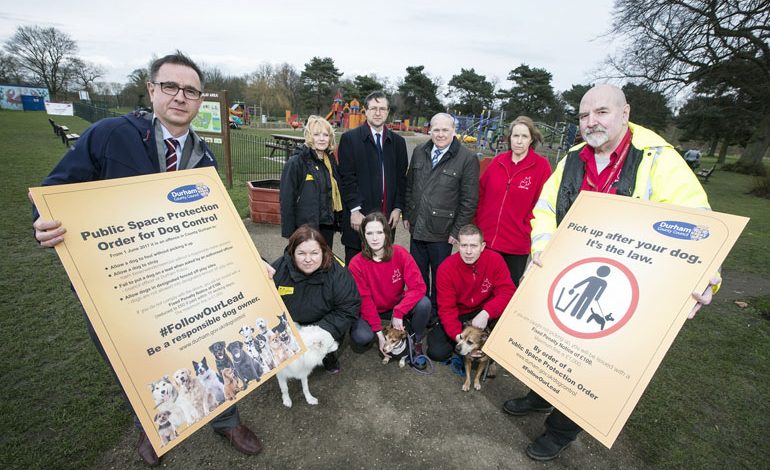 Plans to introduce new enforcement powers for dog control have been met with overwhelming approval.

The new powers, which will mean irresponsible pet owners could be fined up to £1,000, are part of Durham County Council’s new Public Space Protection Order (PSPO).

The introduction of the PSPO will mean that from 1 June the following will become a fineable offence in County Durham:

• allowing a dog to stray;
• failing to put a dog on a lead when asked by an authorised officer;
• allowing dogs into fenced off designated play areas.

The existing offence for allowing a dog to foul without picking it up will continue under the PSPO.

From August to December 2016, Durham County Council sought public views on the proposal to implement the PSPO, and found that 80 per cent of respondents to the consultation agreed with the proposal.

The consultation also found that the majority of those who took part supported the PSPO in the hope that it will:

By making it an offence to allow a dog to stray, it is hoped the number of stray dogs will decrease, which is a key concern that residents have raised with the council.

Trained council officers and Durham Constabulary staff will be able to issue Fixed Penalty Notices for £100 (discounted to £60 if paid within 10 working days) for breach of the Public Space Protection Order.

Failure to pay the FPN will lead to prosecution, with a maximum fine of £1,000.

The order will not apply to anyone who is registered as blind, is disabled or who uses a trained assistance dog.

Cllr Simon Henig, Leader of Durham County Council, said: “We are very pleased with the positive response and welcoming comments by members of the public who agreed, by majority, to implement a Public Space Protection Order for dog control in County Durham.

“These new powers will enable us to take action against irresponsible dog owners and those who affect the public’s health and wellbeing through their actions.

“The new order will also complement our ongoing education and engagement programmes, which encourage dog owners to do the right thing and act in the best interests of others to protect the towns and villages where we live, work or visit.”

Oliver Sherratt, head of direct services, said: “While most dog owners in our county are responsible, it is the minority who spoil our local communities and environment for others to enjoy.

“These new powers will help to keep our neighbourhoods clean, green and safe.”