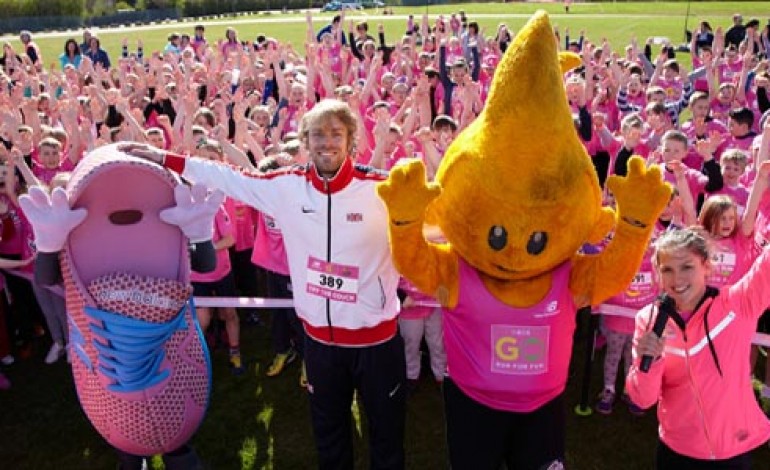 Around 400 children from 11 local primary schools took part in the event, which was also supported by Sedgefield School Sports Partnership, who spurred the children on with a mass warm-up to music, before sounding the horn to start of the race.

The event was one of four to take place across the North East in April, which has seen over 2,500 primary school children running for fun.

With more than 100 events and 55,000 runners under its belt so far, GO Run For Fun is the biggest children’s running initiative in the world, and aims to encourage over 100,000 kids to get off the couch, give the TV a rest and get active by 2016.

The campaign is the idea of Jim Ratcliffe, owner of INEOS, one of the UK’s largest manufacturing companies, which announced a £1.5m donation spread over three years to encourage children to run for fun by establishing the Go Run For Fun charitable foundation.

Middlesbrough athlete Chris said: “Go Run For Fun is a fantastic initiative which has helped so many children across the UK and beyond, get outdoors, running for fun.

“It has been great to see just how much the children here in Newton Aycliffe have enjoyed taking part, and you never know, we might see a star athlete of the future here!”

Moving more is an important part of tackling childhood obesity which is fast-becoming one of the leading areas of public health concern in England. The latest information from Public Health England shows that 33.5% of children in England aged 10-11 are now overweight or obese – a statistic which rises to 36% in County Durham.

Jim Ratcliffe, owner of INEOS, added: “I’m passionate about getting as many children running as possible as early as possible.

“The idea is simple – to get children out of the house having fun. It is not rocket science. Running is the basis of so many great sports. If our children can catch the running bug early, they’re more likely to stick to it, and this can only lead to them having more active and healthier lifestyles in the future.”

GO Run For Fun will continue to tour the UK throughout 2015. For more information and to enter your child for INEOS GO Run For Fun events happening near you, or to register your local club or school’s interest in joining our campaign, please visit: www.gorunforfun.com.