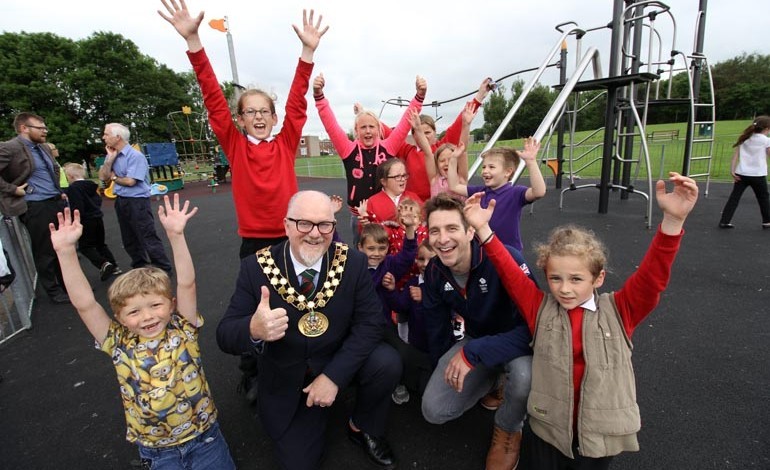 Great Aycliffe Town Council has invested £40,000 in the facility near the Boating Lake in the West ward.

Cook told Aycliffe Today: “It’s fantastic to see this and to see young people out being active, especially this day and age when we’re fighting the PlayStation and Xbox in the digital age.

“It’s just nice to see people down here and using it.”

Cook, now 37, competed in the 2004 Olympics in Athens and the 2008 Olympics in Beijing, and also won Gold in the breaststroke at the 2006 Commonwealth Games in Melbourne, Australia.

He’s convinced that it’s outdoor facilities like play areas and MUGAs (Multi Use Games Areas) which set him on the road to becoming an athlete.

“When I think back to when I was their age, I was always out and about, in parks, on my bike, climbing stuff, the typical no-harm games that I think kids should be getting in to,” he said.

“When I ended up joining swimming clubs and boxing clubs, I always felt I had a level of strength and I’m pretty certain it was from playing outside as a youngster.

“It’s great for fitness and you actually don’t realise you’re getting fit when you’re doing it.

“We’ve got lots of indoor facilities, leisure centres etc, but I believe it’s the outdoor pursuits that benefits you more health wise.”

The new play area at West Park is the latest outdoor facility to be installed by Aycliffe Council.

Works and environment manager Steve Cooper said: “This is part of our rolling programme to maintain all the play areas on the town.

“This play area was completed within two weeks and ahead of schedule. The equipment is unique to the park, and that’s what sold it to members of the public during the consultation process.”

More of the same, says Mayor