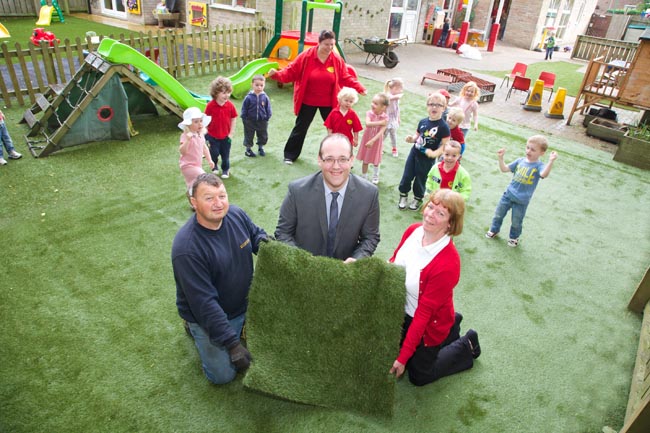 A local company has leapt to the rescue after cruel thieves targeted a Newton Aycliffe nursery.

As revealed on Aycliffe Today two weeks ago, Play Day Nursery staff were shocked to find out that its artificial grass had been stolen – just three weeks after it had been installed in its garden area for children to enjoy.

But Shildon-based Grass Direct, one of the UK’s fastest-growing artificial grass suppliers, has kindly donated some of its artificial grass to bring the playing area back to tip-top condition.

Linda Watts, manager at Play Day Nursery, said: “The thieves had hacked the grass out after scaling our back fence. They destroyed our playing area for the sake of some artificial grass.

“It’s disgraceful, especially since it was only recently installed, and their actions have consigned the children to playing indoors, which has had a big impact on their playing time.

“I am extremely grateful to Grass Direct for their kind donation, which will restore our garden area back to its former glory and allow our children to enjoy themselves outside. It is actions like this that gives you back your faith in human society.”

Dan Foskett, managing director at Grass Direct, said: “After hearing the news of such a disgraceful crime in the community, I was more than happy to help out Play Day in this way.

“There is no excuse for such crimes in today’s day and age, especially stealing from a nursery, and I hope that the children at the nursery enjoy their new playing area and the nursery moves on from this ordeal.”