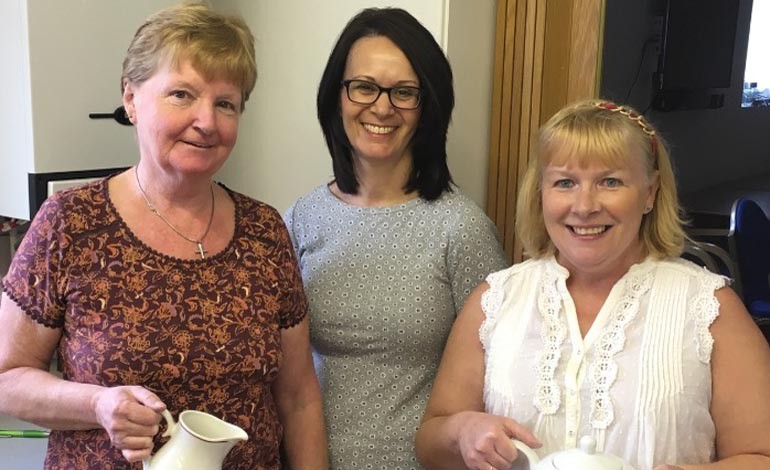 Friends of a church community came together at the weekend to raise over £1500 for the charity Bloodwise in the name of Newtonian Paul McGeary and his #NotOneInch fundraising campaign.

McGeary was diagnosed with relapsed blood cancer APML earlier this year, having been in remission from an initial diagnosis back in November 2014, and the 34-year-old is currently undergoing chemotherapy once more at the James Cook hospital in Middlesbrough.

Fundraising efforts over the past two years have been well publicised and the total amount raised by friends and family under the #NotOneInch banner now stands at a remarkable £22,826.53.

Saturday’s efforts was the brainchild of McGeary’s mother Mary Warke, who together with close friends Joanne Prior and Marie Matthews organised a coffee morning at St Marys Church in Aycliffe, which included various sales, raffles, a tombola and some very generous private donations.

“The room was packed for the whole two hours as people came and went,” said McGeary.

“It was warming to see so many people turn up to support the event.

“It was a fantastic reward and testament to the hard work of my mum and her friends, and I’d like to place on record my thanks to not only the three chief organisers, but to the large support network around them who donated cakes and prizes, and those who helped out on the day.

“The team raised around £1200 at a similar event in March last year, and they were determined to surpass that amount, which they achieved comfortably. Their hard work really paid off when we counted the final amount.”

McGeary joked: “Staff in the coffee establishments around town will have had an easy shift on Saturday morning, because we seemed to have all the coffee drinkers under our roof. It was a fantastic success.”

McGeary and his wife Becky are now urging people to sign up to the bone marrow donor register at www.anthonynolan.org and www.dkms.org.uk/en