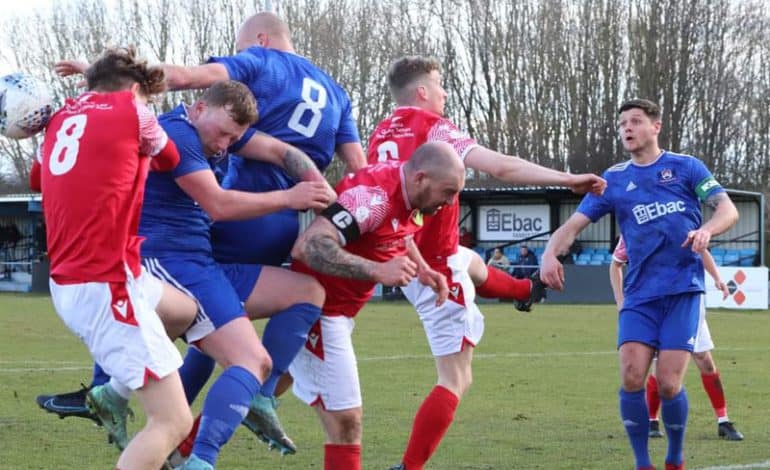 As much as a scoreline showing four goals makes it look an eventful game, this one only tells half the story.

Aycliffe kicked off at 3pm and Penrith kicked off before 3.01pm as the home side got off to the best possible start.

Liam Jarvie got straight in behind the Penrith defence to latch on to a clever pass from Joe Ferguson before firing past the visiting keeper to give Aycliffe the lead after just 36 seconds.

Within minutes the lead could have been doubled as Ben Dibb-Fuller rounded the keeper but pulled his shot into the side netting letting the visitors off the hook.

The second goal did come early in the game, after just five minutes, but at the opposite end of the pitch, when Johnson, in the Aycliffe goal due to the absence of Adam Pickford, made a smart save down to his right to put the ball around the post for a corner.

The in-swinging corner sailed over the crowded area, with Johnson unable to come for the ball as he was pinned to his line by Penrith forward Gardner, and landed straight at the feet of Moynan, who came in at the back post unmarked to side foot the ball into the net.

In the 17th minute the second turning point of the game occurred when Joe Ferguson overstretched towards a loose ball, failing to control it, leaving his foot high clashing into his opponent’s leg, the referee blew his whistle and the flurry of red shirts which immediately surrounded him got what they were baying for as it was the red card which was brandished.

Going down to 10 men hurt Aycliffe as they took their time to adjust to the required change in shape with some of the usual high tempo passing and link up play not coming together as it has been of late, whereas the visitors saw it as a time to push forward and put pressure on the home defence, but by half time Aycliffe had got to grips with the task in hand going in level at the break.

Within ten minutes of the second period Brian Atkinson made a change in personnel introducing Andrei Ardelean to the fray with a view to adding strength to the forward line but before Aycliffe had a chance to get forward they found themselves behind for the first time in the game.

Penrith whipped a corner in from the left which was flicked on at the near post and into the path of Grant Davison who was lingering at the back post to fire home, leaving Aycliffe a goal, and a man, down with over half an hour to go.

Newton Aycliffe, though, on the back of six wins in a row, were not beaten yet as on 64 minutes Ethan Wood played a sublime ball diagonally into the penalty area which was met at the back post by the head of Ardelean who nodded the ball back across the face of goal to Liam Jarvie who reacted first to turn the ball home.

With 25 minutes left of the clock could we get any more incidents? Well, we did!

With both sides having their share of possession and forays forward, it was while Penrith were building up down the right when Liam McNamara slid into a tackle only to stand back up to see the referee showing his red card for the second time.

With nine men for the remainder of the game Aycliffe still had the only one real chance to score as, with seconds left on the clock, Andrei Ardelean broke through the high defensive line to find himself one on one with goalkeeper Taylor who came rushing out and blocked the attempted chip with his top hand as he went down at Ardelean’s feet to deny the 9 men all three points.

Aycliffe’s next outing comes this Wednesday (March 16) as they make the 10-mile journey to visit Crook Town in The Durham FA Challenge Cup semi-final. Kick off at the Sir Tom Cowie Millfield in Crook is 7.30pm and, as always, your support is greatly appreciated.

That game is followed by a return to League action on Saturday (March 19) with a trip to Sunderland RCA.

Above picture by Yvonne Wood.