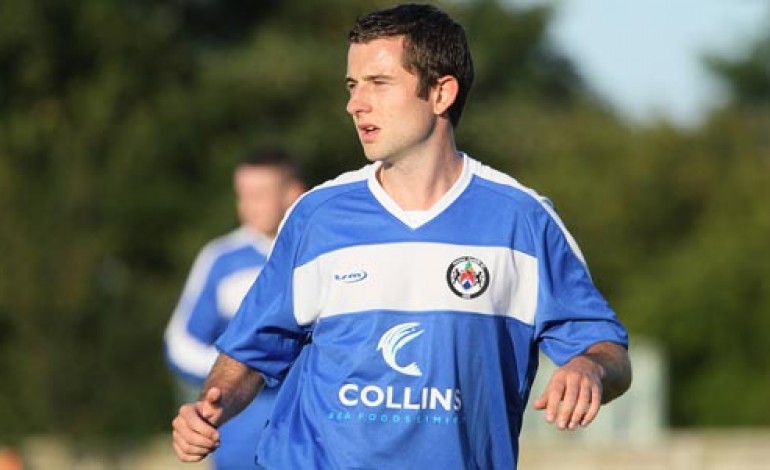 Newton Aycliffe found their shooting boots as they warmed up for the visit of Conference North outfit Harrogate Town on Friday by despatching Gateshead’s Leam Rangers 9-1.

In a one-sided affair, Allan Oliver’s side went goal crazy, with braces apiece for Kris Hughes (pictured), Nathan Wilson and Gavin Barton – his third double in as many games.

Fred Woodhouse, Mark Peck and Paul Robinson were also on target with Adam Barnett replying for the hosts with the game beyond reach for the Durham Alliance side.

Barton notched his first after 14 minutes when he turned home Peck’s corner before the giant defender looped a header into the corner from a Hughes centre a minute later.

A clever one-two between Wilson and Barton resulted in the 20-year-old former Sunderland Academy product cutely finding the bottom corner before Woodhouse made it four on 40 minutes from two-yards out following a scramble.

Barton screwed a penalty wide before the interval but within seven minutes of the restart he doubled his tally with a fine drilled finish following good work from Robinson.

Eighteen minutes remained when Wilson took a couple of touches before angling a fine drive into the corner from the edge of the area but the best was yet to come as Robinson opened his Aycliffe account.

Again Barton was instrumental in the build up and another one-two released the former Newcastle forward who lobbed the advancing ‘keeper from 25-yards.

Thirty seconds later Hughes got in on the act when he neat the ‘keeper to the ball before rounding him and stroking home from the edge of the area before Leam pulled their consolation back after a rare mistake from skipper Sean Tarling, filling in as a late centre half following Peck’s withdrawal.

Hughes added his second as the game petered out with a coy finish over the ‘keeper and boss Oliver was elated that his side are finding gear as the season approaches.

“We’re getting there,” he said. “Every game they play, they’re gelling. There’s goals all around the side and we’re reaching a level of fitness and intensity which will serve us well once competition starts next week.

“Harrogate will be a different test to the lads, because we’ll probably be without the ball for periods, but if we can carve chances as we have done tonight and in the previous two games, then we’ll be more than a match for them.”

Harrogate’s visit to Moore Lane Park on Friday concludes the Newtonians’ pre-season campaign, with FA Cup football returning to the town on August 11th as Holker Old Boys from Cumbria provide the opposition.