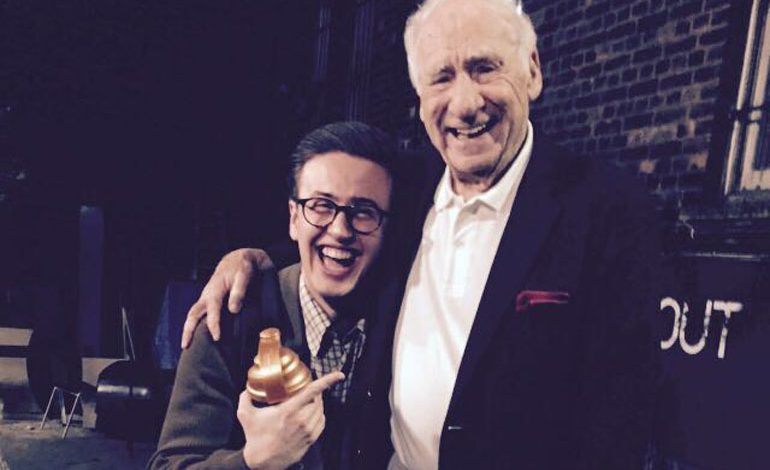 A former Woodham Academy student has described his debut on the West End stage – and working with a Hollywood legend – as a “dream come true”.

Nathan Elwick took his bow in ‘Young Frankenstein’, written by Mel Brooks, as it opened in London this week.

The 23-year-old is appearing in the musical comedy at the famous Garrick Theatre following a successful run at Newcastle’s Theatre Royal.

“This show has been a dream come true,” Nathan said. “Growing up with all the old Universal Monsters and Mel Brooks films, it’s now amazing to be in a show working with Mel himself.

“It’s a show where I get to tap in top hat and tails and also be a monster occasionally. To work with Susan Stroman and Mel Brooks is a dream come true. This is a complete dream job and I couldn’t be luckier”

Nathan arrived at Woodham Academy as an 11-year-old already with a passion for musical theatre. He was fully involved in the music department throughout his time at Woodham, and played leading roles in the school’s regular productions.

Assistant head and music teacher Tina Taylor, who watched Nathan during the Newcastle run, said he is “amazing” in his latest role.

She said: “It’s wonderful to see a student arrive in school with a clear ambition and go on to realise his dream. It was obvious that Nathan had lots of talent, but he also had dedication and has done everything he possibly could to make this happen. It’s great to see all his hard work paying off – he thoroughly deserves his success.”

He also worked hard outside of school, taking lessons in singing and dancing. After leaving Woodham Academy, he studied at Newcastle College and then at ArtsEd in London. While training, Nathan appeared in The Addams Family, and in Follies in Concert at the Royal Albert Hall. His theatre credits include Aladdin at Nottingham Playhouse and a UK tour of The Glenn Miller Story.