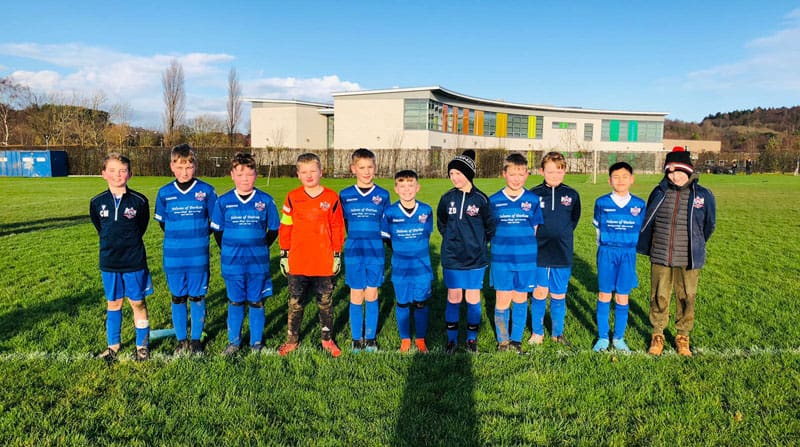 Aycliffe U8s Whites played against Leam Rangers Yellow. A really difficult game for Aycliffe but they battled for every ball. Aycliffe’s goal was scored by William. MOTM was awarded to Harry Cain.

An exciting final game of the year for Aycliffe U9 Blacks v NSG Tigers. The game started really well with both teams having chances but not taking them, NSG eventually took the lead late in the first half from a scrambled finish in the box. NSG quickly added another, Aycliffe did not get disheartened and Rhys scored a quick reply. An unfortunate deflected free kick gave NSG another but once again Rhys got Aycliffe back in to the game with a fine finish. Aycliffe showed great spirit to keep the pressure up with Benjamin scoring a great goal in the final 10 minutes and with only a few minutes to go the ball came loose to Rhys who took his opportunity getting a deserved hat trick as a result. Well done to the stand in keepers Charlie and Max, MOTM was awarded to Rhys.

Aycliffe U9 Juniors played the final game of their mini league at home to league leaders Boro Rangers City who have not dropped a point in the league. Aycliffe started well and a fantastic ball across the box from Jack saw Jonah open the scoring. Boro Rangers pulled one back but some more great play from Aycliffe and Jack scoring saw Aycliffe go into half time smiling. As expected Boro came at Aycliffe and both teams were creating some great chances. Boro added more goals, but then there was great link up play between Jonah and Jack for Jack to get his second of the game. Aycliffe battled all game playing some great football and with a superb last minute save from Joel the game ended. A fantastic ending for Aycliffe with that result. MOTM was awarded to Jack. In development Charlie scored his first goal for the club.

Aycliffe under 11s were away against Nunthorpe Athletic. Aycliffe started well on a surprisingly good pitch, unfortunately the pressure from Athletic finally broke Aycliffe’s back line and Athletic showed why they have only lost once this season by scoring goals before half time. It was Thomas’s first game as our official club captain and in goal pulled off some amazing saves. Oscar defended so well and James was excellent again in his new midfield role working really hard. Aycliffe moved the ball a lot better with Callum, Ethan and Alex all getting further up the pitch and creating chances. Thomas was unlucky as a shot he pushed onto the bar fell to the Athletic striker who made it a goal. Athletic went on to score another. A fantastic effort in the 2nd half from everyone and Jamie was absolutely brilliant at the back. MOTM was awarded to Jamie.

U12 Whites played just their 3rd game this season, away to Darlington Young Bulls. Looking to get their first points of the season Aycliffe started brightly but DYB pressed forward in numbers overwhelming Aycliffe. DYB went into the break leading 2-0. In the second half Jake managed to score by capitalising on a goal kick error from DYB’s keeper which gave Aycliffe a lift but DYB continued to press. A super long high shot put them 3-1 up and they added a fourth. Jake finished from a corner to make it 4-2 final score to DYB. Man of the match was Joshua who was solid in defence throughout.

Aycliffe U12s Blacks against Durham City Tigers. First half Durham City Tigers dominated; they had an early penalty awarded which came off the post and Harry saved the second follow up. Aycliffe took a corner which whipped off the crossbar and Aycliffe’s defender Lewis blasted it in to the net. Aycliffe came out strong in the second half and managed to grab an early goal but with 10 minutes to go Durham scored from a counter attack but Aycliffe managed to hang on and won 2-1. Both teams struggled with the pitch condition and were denied goal chances. Aycliffe’s goal keeper Harry and the away keeper were both excellent, goal scorers were Lewis and Keaton with an assist from Steven. MOTM was awarded to Luke.

Aycliffe U13s Whites headed to league leaders Whinney Banks for their last game before the Christmas break. Whinney Banks played some excellent football in the first half and scored three goals in quick succession. Aycliffe were outstanding in the second half, pressing high and dominating the ball, however, it took them until the 65th minute to score. Ollie, who was playing at CB at the time, received the ball from a throw in on the right hand side took a touch and lobbed the keeper from way out. An excellent second half performance from Aycliffe which if they had started this way would have resulted in a different score line. Whinney Banks added a 4th late on. MOTM was awarded to Brad. Whinney Banks 4-1 Aycliffe Whites.