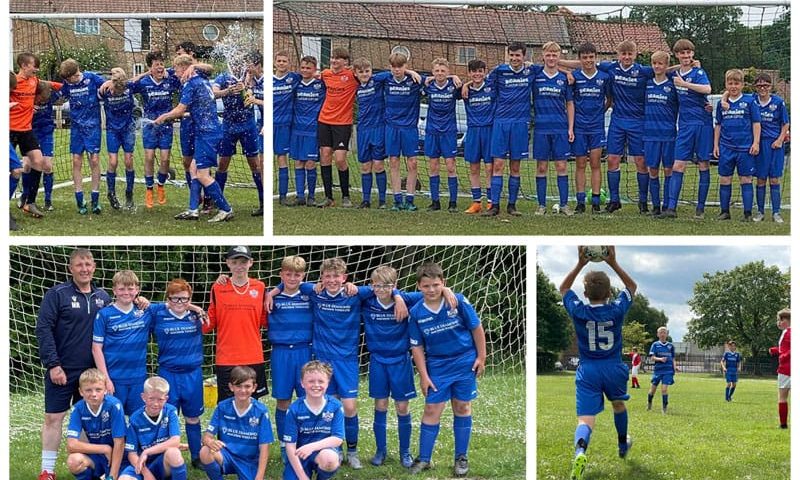 U8s whites played Hebburn Town Valencia in an exciting game, and despite dominating, we went in at HT down. 2nd half and we were class. Harry C grabbing a hat-trick & MOTM. All boys were all excellent again today and we have come a long way in the last few games. Super proud coaches & can’t wait till next season.

U8s Blacks hosted Billingham Synthonia in their final league game, and signed off in fine style. The lads were full of confidence after their recent good run of form. A tight first half saw Billingham edge in front, Second half we played some fantastic football, Regan equalising following lovely football from Max and Jacob. We went further ahead and got the result we wanted. An unbelievable team performance from everyone involved. MOTM Jacob

U9s blacks V Shincliffe Juniors. Fantastic effort from everyone. We dominated the match for much of the game, the boys created lots of chances, they were just unlucky not to score. MOTM went to the whole team today for excellent team work and determination, battling hard right to the final whistle

U12s Whites away to Leven who quickly went 2-0 up in 20 mins. Josh grabbed one back with a great strike, but Leven went 3-1 up at HT. Despite matching the hosts, Leven went 4-1 up. Ethan then bagged a goal for Aycliffe, meaning the FT score was 4-2 to Leven, but were showing improvement week on week. MOTM Josh, very little got past him in CB.

U12s Blacks hosted Seaham Town knowing the hard battle ahead, but from the off they got straight into it. Alex put us up 1-0 with a fantastic goal. He then grabbed another following some brilliant passing from the team. Seaham got 1 back, 2-1 HT. with the heat telling, Seaham levelled, 2-2. That rejuvenated the lads and Alex grabbed his Hat-trick. The football was great, class skill and some awesome passing. FT and a deserved 3-2 Victory.

U14s continued their 100% start to the season with a 5-4 win tonight against Blackwell Rangers. Goals coming from Trav x2, Reece x2 Josh x1. A win on Sunday will see us win the league with a game to spare. And that we did, playing away to Carlton Miniotts, coming away victorious on a day that saw us clinch the Division 4 league title with a 4-2 score line. Trav x2, Jake x1 and Alfie x1 making it a remarkable 17 wins from 17 games. A great achievement for a team that finished bottom of division 8 only 4 seasons ago, an awesome achievement.

U15s welcomed 2nd placed Hetton, for a midweek fixture. The game was evenly contested throughout, with Aycliffe being strong in defence and quick to counter. Aycliffe heads didn’t drop despite going behind to a couple of scrappy goals. We dominated in the second half, resulting in an excellent team goal superbly finished by Anthony. Overall a 4-1 defeat was not a true reflection on the game, Aycliffe can certainly be proud of their display throughout. POTM: joint between James and Charlie

U16s continued to put pressure on the leaders with a superb 6-2 win at home to Thornaby Town, 2 games left and still a slim chance of topping the table. Goals from Jack x4, Brennan x2, with every player class throughout in one of the best performances of the season. On Sunday we played at home (Moore Lane) against Billingham. A nervy 10 mins saw Billingham take the land against the run of play, but once the lads had settled into the surroundings we started to play good football. We totally dominated the game and ran out 7-2 winners, Brennan x3, Jack x3 and Callum x1….big thanks to everyone who came down to support the lads @ Moore Lane.