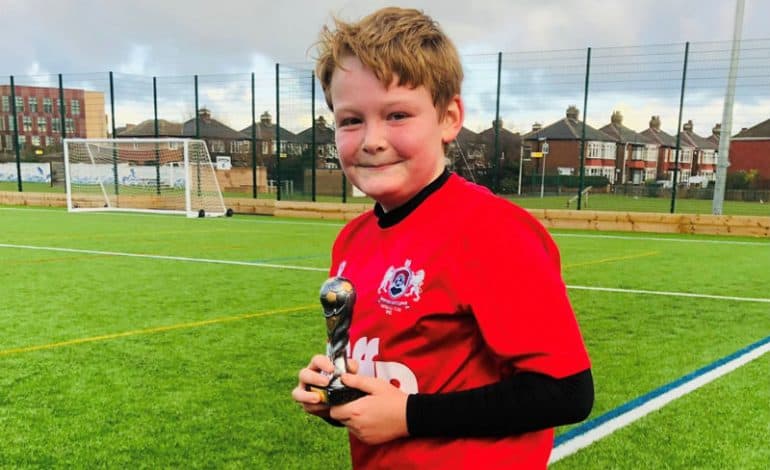 Torrential rain led, to a number of fixtures being postponed again this week.

Under 10’s Whites – Played against Coxhoe United, with a depleted squad. Although the boys battled hard, they just ran out of steam towards the end of the game. Jonah scored a great goal, with MOTM being shared by Sammy & Maxi who never gave up and worked hard throughout.

Under 10’s Blacks – Played a tough game in the local derby against a good Heighington team. The game started slowly with the Blacks being behind at half time, in the second half the Blacks settled down and defensively looking very solid. Benjamin grabbed a goal with a quick break and good finish. There were some fine individual performances, with the Blacks battling well. MOTM went to Olly for a great defensive display

Under 12’s – Travelled to Prissick Rovers, starting well with an early goal coming from Callum, assisted by Keaton. Callum then grabbed his second to make it 2-0 to Aycliffe. Defensive confusion saw Prissick grab a goal before half time. Aycliffe just could not find that third goal and eventually missed opportunities cost us and Prissick scored two more goals to make it 3-2 to the hosts at full time. MOTM was Oscar.

Under 13’s Blacks – Travelled to Deerness, in a superb first half the lads led at half time 3-0. A further flood of goals in the second half seen the Blacks come away with a 6-0 win. Goals from Danny, Alex (Hat-trick), Robbie & Cody. MOTM was Danny.

Under 14’s – Travelled to Hartlepool Pools Youth, losing 3-1 with the goal coming from Mason.

Under 16’s – Entertained Sunderland Rangers Reds at Woodham this weekend, and after a lot of hard work in training, finally got the result their recent performances have deserved. Dominating throughout, Aycliffe took an early lead when Brandon collected a cross and finished from close range. Archie extended the lead with an excellent volley following a great team move, leaving the score 2-0 at half-time. The second half continued in the same manner, Aycliffe going close on several occasions before Archie added to the score line with a calm finish from a pass from Lewis. The scoring was completed in the last seconds of the game, when Archie rounded the keeper for his hat-trick and a 4-0 win. Overall an excellent performance from start to finish from everyone.